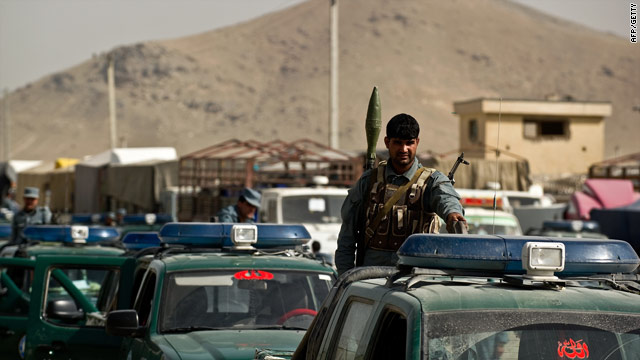 The death toll for campaign staff and election workers in the run-up to the vote now stands at 21, according to Tabish Forugh of Afghanistan's Independent Election Commission. Another 26 people have been wounded.

The Taliban has threatened to target polling stations during the voting. Security is one of the election commission's biggest concerns, Forugh said.

Of the 6,835 polling centers, the commission has ordered 1,030 closed due to security threats. Polls in only nine of Afghanistan's 34 provinces will be fully open Saturday.

Afghanistan's interior ministry announced it will deploy 52,000 police, soldiers and national security officers on election day. They will be complemented by troops from Afghanistan's NATO-led International Security Assistance Force.

"Every vote cast by an Afghan in these elections ... is a perfect statement against the Taliban," said ISAF spokesman Brig. Gen. Josef Blotz at a news conference Thursday. "Every time someone votes in a polling station, the Taliban loses."

Meanwhile, the U.S. Embassy in Kabul on Thursday issued a new warning of potential violence surrounding the elections. It alerted U.S. citizens to avoid crowds and public gatherings and said some road closures and checkpoints at polling stations are to be expected.

And the United Nations encouraged international employees not involved with supporting the election to take leave during the polling.

Elsewhere, an international forces service member shot a protester who aimed his AK-47 toward a guard tower at a NATO military base in southern Afghanistan, military officials said Thursday.

The man was pulled away by fellow demonstrators before ISAF forces were able to determine his condition.

The protest of about 100 Afghans at Forward Operating Base Mirwais was reported to have been held in response to an alleged Quran burning inside the base Wednesday. But ISAF said the suspected burning was a routine burn-pit session in which military documents are destroyed.

The protest turned violent when the Afghans began throwing rocks at the base guards. ISAF said the armed protester was shot in accordance with the rules of engagement.

Also in southern Afghanistan, two international service members were killed Thursday in a bombing and an insurgent attack. No other information, including the service members' nationalities, was immediately available from ISAF.

CNN's Ivan Watson and Matiullah Mati contributed to this report.