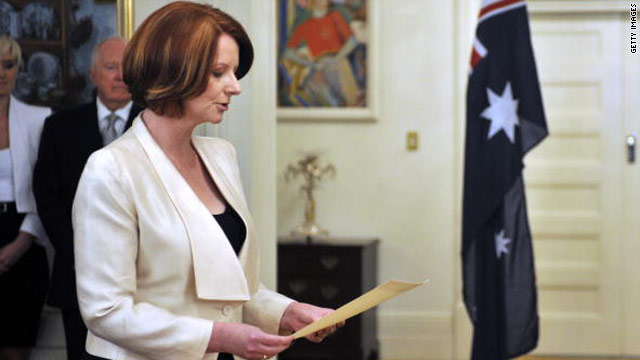 "I, Julia Eileen Gillard, do solemnly and sincerely affirm and declare that I will well and truly serve the Commonwealth of Australia, her land and her people in the office of prime minister," she said, as she accepted the oath of office from Governor General Quentin Bryce at Government House in Canberra.

Among the ministers who will serve in her Cabinet is the man she overthrew in June: Kevin Rudd as foreign affairs minister.

Gillard, who was Rudd's deputy prime minister, toppled him from the top job during a power struggle within the Labor government. At the time, Rudd's popularity had tumbled.

Soon after, Gillard called an election for August -- the outcome of which was decided last week when the support of two independent members of parliament enabled Labor to retain government with a 76-74 majority.