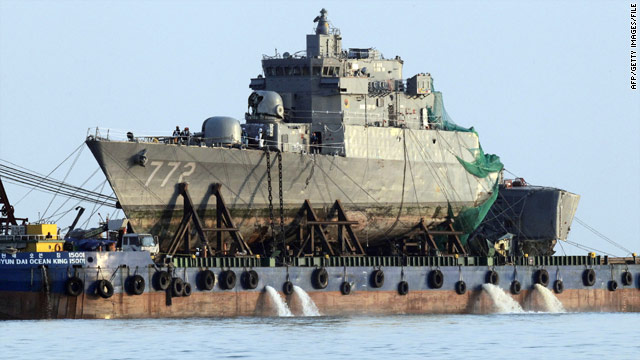 North Korea denies any responsibility in the sinking of the Cheonan. The South Korean ship's salvaged bow is pictured in April.
STORY HIGHLIGHTS

(CNN) -- South Korea's final report on the March sinking of the warship Cheonan reaffirms that a North Korean torpedo sent the ship to the bottom of the Yellow Sea, killing 46 sailors.

The full report, released Monday and based on an investigation conducted by South Korean, U.S., Swedish, British and Australian officials, offers new details to back up May's preliminary report on the incident.

"The ROK Navy ship Cheonan was sunk by a North Korean torpedo attack while conducting a normal mission in the vicinity of Baengnyeong Island at 09:22 p.m. on March 26, 2010," the English-version of the report says in its conclusion, according to a Korea Times report.

The report says the torpedo did not strike the ship, but the shock wave generated when it exploded nearby split the Cheonan in two.

"The detonation location was 3 meters to the port from the center of the gas turbine room and at a depth of 6 to 9 meters. The weapon system used was a CHT-02D torpedo with approximately 250 kilograms of explosives manufactured by North Korea." South Korea's Yonhap news agency quotes the report as saying.

The shock-wave effect is substantiated by survivors' accounts, according to the Yonhap report.

"Forty-one survivors said that they smelled oil, but there were no witnesses of flames, fire or a water column, nor were there any injuries from these factors," Yonhap quotes the full report as saying.

Critics say the final report still leaves questions. For instance, while investigators found traces of explosives on the hull of the Cheonan, no trace of explosives was found on torpedo parts recovered from the scene.

Investigators said that could be because the torpedo parts were too small to hold trace explosives, according to a Korea Herald report.

The final report also includes communication between the captain of the Cheonan, Cmdr. Choi Won-il, and his boss, squadron commander Capt. Lee Won-bo, according to Yonhap.

"I think we've been hit by something," Choi told Lee.

"What do you think it is?" Lee asked.

North Korea has denied any involvement in the sinking of the Cheonan, calling the results of the preliminary report "sheer fabrication," according to its official Korea Central News Agency. KCNA had not yet posted any reaction to the full report.