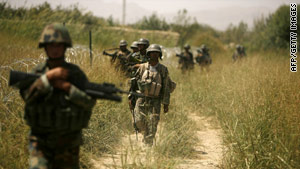 Afghan troops patrol the outskirts of the town of Jellawar in the Arghandab valley.
STORY HIGHLIGHTS

Afghan and NATO troops found him in a compound in the village of Kambu, they said in a statement.

They first called by loudspeaker for everyone to come out peacefully, but some residents "were unresponsive," the military said.

As troops moved in, "several armed insurgents inside the compound displayed hostile intent," the force said.

They engaged and killed the five insurgents, including the Taliban commander, they said.

ISAF did not say whether its forces sustained casualties in the firefight.

There was no immediate Taliban comment regarding the incident.