China to boost surveillance of superbug that resists antibiotics 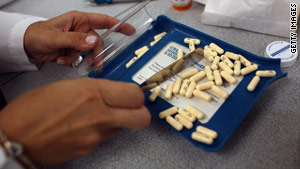 China is at risk of an outbreak of the superbug, partly because of the overuse of antibiotics.
STORY HIGHLIGHTS
RELATED TOPICS

Beijing, China (CNN) -- China's capital will step up surveillance of antibiotic-resistant bacteria in response to a superbug that first emerged in South Asia and is spreading globally, state media said.

Cases of the NDM-1 superbug, as it's commonly known, have been reported in countries such as Australia, Britain, Canada, Japan, the Netherlands, Sweden and the United States. China has not detected the bacteria, but is at risk of an outbreak because of geography, global travel and the overuse of antibiotics.

The improper use of antibiotics has led to one of the world's most pressing public health problems, according to the U.S. Centers for Disease Control and Prevention. Antibiotics cure bacterial infections, not viral infections such as colds and flu.

Many bacteria have become resistant to commonly prescribed antibiotics, leading to longer illnesses, more doctor visits or longer hospital stays, and the need for more expensive and toxic treatment, the CDC says. Some resistant infections can lead to death.

The New Delhi metallo-lactamase-1 (NDM-1) gene is thought to have emerged in India or Pakistan. But India has rejected British scientists' findings that travelers picked up the bacteria when they went to India for inexpensive medical treatment, including cosmetic surgery. The Indian health ministry says such organisms are present universally.