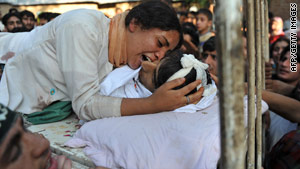 A woman holds the body of a relative at his home north of Srinagar on September 6, 2010.
STORY HIGHLIGHTS
RELATED TOPICS

The deaths bring to 69 the number of people killed in 87 days of violence, as demonstrators stage large protests and block highways in marches calling for independence for the region. Hundreds of others have been wounded.

Monday's violence came in Palhallan, about 40 kilometers (25 miles) north of Srinagar,when protesters blocked a highway. Police fired to disperse the crowd after some demonstrators began throwing stones, some of them targeting a motorcade carrying the Kashmir zone police chief.

Guards accompanying the motorcade chased members of the mob, injuring some in the process, a police spokesman said.

The police administration has initiated an inquiry into the shooting, the spokesman said.

"The ammunition of the policemen is being checked to (determine) responsibility. Those found to be involved shall be proceeded against strictly according to the law," the spokesman said.

Thousands of people shouting anti-Indian slogans later blocked the highway. The Muslim-majority Kashmir has seen some of the worst unrest ever against Indian rule since June 11, when a teenager was killed in Srinagar by a tear gas shell.

New Delhi's efforts to break the cycle of violence have not yet shown any results. Kashmiri separatists have put forth five demands for ending the unrest and starting a dialogue with New Delhi. They include the acceptance of Kashmir as an international dispute by New Delhi, which views it as a domestic problem. They also want the release of detainees and the withdrawal of security forces from civilian areas of Kashmir.

The separatists warned that if the demands were not met by the Muslim holiday of Eid, which falls later this week, they will intensify the agitation.

Kashmir has been a source of bitter dispute between India and Pakistan. The region is claimed by both, and each rules part of it. Indian-administered Kashmir has been in the throes of separatist violence for the past 20 years, leaving -- according to the official count -- 43,000 people dead.

However, many human rights groups and non-governmental organizations say the figure is twice the official estimate.