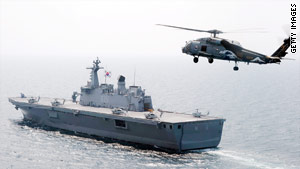 The exercises were scheduled to begin Sunday and run through Thursday, the forces said in a statement. Tropical Storm Malou is forecast to arrive in the region Monday.

Military officials said the exercise could have gone ahead despite the weather, but safety concerns prompted the postponement.

"Although the alliance is capable of operating in all weather conditions, this decision was made in the interest of safety for the participants," the U.S. military said in its statement. "Both high winds and heavy seas would have directly impacted the exercise area and the training objectives."

The exercises will be rescheduled but a new date has not been set, the statement said.

U.S. officials have said the naval exercises off the western coast of the Korean peninsula are in response to North Korea's alleged sinking of a South Korean warship last March.

"We said that we would continue a series of exercises that are defensive in nature, that are designed to send a clear message to North Korea," Pentagon spokesman Bryan Whitman said in August.

The report, whose findings have been endorsed by the U.S., alleged that a North Korean sub sank the Cheonan warship with a torpedo, killing 46 sailors.

North Korea denies it sunk the ship and has sharply criticized the military exercises, describing them as war games conducted under a false pretext.

"The U.S. forces side would be seriously mistaken if it calculates it can browbeat [North Korea] through large-scale war exercises," the state-run KCNA news agency said in July. "It should immediately stop the [anti-North Korean] nuclear war racket."

"[This] double-dealing attitude is a dangerous one of driving the situation on the Korean Peninsula to a war phase," KCNA said.