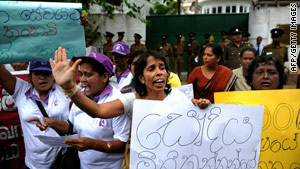 Sri Lankans protest Monday outside the Saudi Arabian Embassy in Colombo over the alleged abuse of a maid.
STORY HIGHLIGHTS
RELATED TOPICS

Colombo, Sri Lanka (CNN) -- A Saudi employer and his wife, who are accused of torturing a Sri Lankan housemaid by hammering nails into her body, have been arrested in Riyadh, Saudi Arabia, officials at the Sri Lankan External Affairs Ministry said Monday.

Saudi Arabian authorities could not be reached immediately for verification. No further details were available.

The two suspects have not been named.

Doctors at a Sri Lankan hospital operated for three hours Friday to remove 18 nails and metal particles allegedly hammered into the arms, legs and forehead of a maid by her Saudi employer.

Dr. Kamal Weeratunga said the surgical team in the southern town of Kamburupitiya pulled nails ranging from about 1 to 3 inches from Lahadapurage Daneris Ariyawathie's body. He said doctors have not yet removed four small metal particles embedded in her muscles.

"It was cruel treatment, which should be roundly condemned," said L.K. Ruhunuge of the Sri Lanka Bureau of Foreign Employment.

He said the Sri Lanka government has forwarded to Saudi authorities a detailed report on the incident, including statements from Ariyawathie.

Ariyawathie left Sri Lanka on March 25 to work as a housemaid in Riyadh after the bureau registered her as a person obtaining a job from an officially recognized job agency.