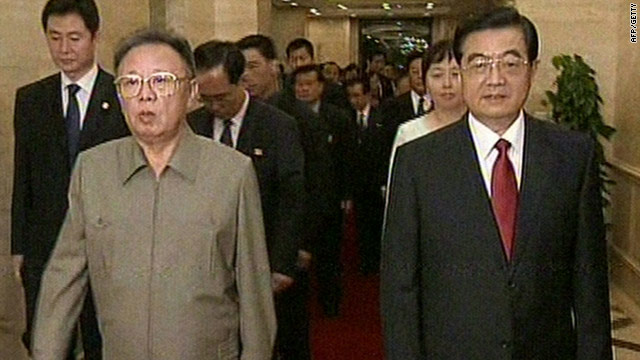 (CNN) -- Almost as soon as it was confirmed, the visit of reclusive North Korean leader Kim Jong-Il to China was over Monday.

Kim said he hoped for an early resumption of six-party talks to ease tension between North and South Korea, the news agency reported.

On Monday, the state-run Xinhua news agency quoted Kim as saying that North Korea "is not willing to see tensions on the peninsula." He also expressed a desire to "maintain close communication and coordination with China in pushing for an early resumption of the six-party talks."

Kim was in China from last Thursday until Monday, Xinhua reported.

Kim's visit to China was seen as related to his anticipated transfer of power to his son, Kim Jong-un, the Yonhap news agency of South Korea reported last week.

Upon leaving Monday, Kim sent a message of thanks to Chinese President Hu, which was quoted by the official Korean Central News Agency. He touted relations between the Democratic People's Republic of Korea and China. "During our visit to the northeastern region of China where the revolutionaries of the elder generation of the two countries created the history and tradition of the DPRK-China friendship through the bloody struggle against imperialism we more keenly realized how dear the DPRK-Sino friendship is as it is cherished deep in the hearts of the two peoples and weathered all trials of history."

The North Korean leader predicted a long-lasting "friendship" between the nations and wished the Chinese people well. "I sincerely hope that the fraternal Chinese people would achieve greater successes in the efforts to build a comprehensively well-off socialist society on the basis of the scientific outlook on development under the leadership of the CPC with you as general secretary," his letter to Hu said.

Kim's trip coincided with former President Jimmy Carter's visit to North Korea, during which Carter secured the release of a U.S. citizen who had been sentenced to eight years hard labor for crossing the Chinese border into North Korea.

The Chinese president, meanwhile, said "there had been some new developments" since the United Nations Security Council condemned the sinking of a South Korean warship in March.

A South Korean investigation concluded that North Korea sank the ship. Several Western nations said they agreed with that conclusion, but the Security Council did not specifically name North Korea when it condemned the sinking in July.

The Xinhua news agency did not elaboration on what Hu was referring to when he spoke of "new developments."