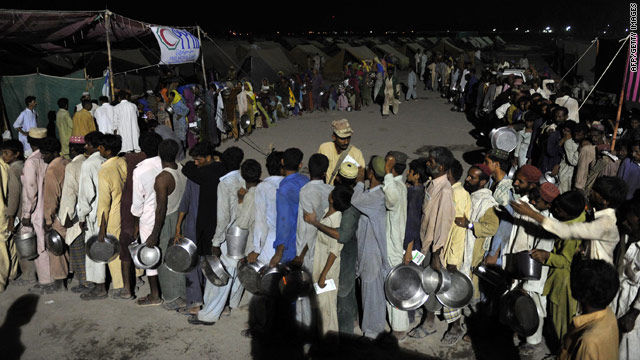 Millions of people in Pakistan are totally dependent on outside aid for the basics -- food, water and shelter.
STORY HIGHLIGHTS

Sukkur, Pakistan (CNN) -- The head of the U.S. Agency for International Development traveled Wednesday to relief camps in Pakistan's southern Sindh province to get a personal look at what is being done for the flood victims and what they still need.

He got an earful.

"They are saying we get food now, but our children are sick," an interpreter told Dr. Rajiv Shah at a camp in Sukkur, near the border with India.

"It's tragic, and when you walk through there and they talk to people, the first thing they tell you is what they've lost, which is generally everything," Shah said. "And then they quickly get to the things they need right now."

For some, that list is seemingly endless, but in the camps visited by CNN, food and clean drinking water were not on it; they appeared to be in plentiful supply.

Still, that was not the case throughout the country. Nearly a month after the initial floods began to inundate much of the country, new arrivals were continuing to reach the camps each day, coming from areas still being flooded by the Indus River.

Officials have estimated the flooding has set back the country's development by decades.

In recognition of that, the United States is redirecting another $50 million to flood aid from earlier projects.

"We know that we can use resources that are effective and efficient and we know that if we do that right now we will save lives and prevent disease," Shah said. "That's what our humanitarian and moral mission is."

The U.S. interest in Pakistan goes beyond helping flood victims. Pakistan is a strategic ally in the U.S. anti-terrorism effort.

Analysts contend that the United States can ill afford to let a lack of Western aid increase the influence of charities associated with militant groups.

But whether the outpouring of donations from U.S. taxpayers can appease the Pakistani public, many of whom resent U.S. drone strikes in the country's north, is uncertain.

A recent Pew Survey found nearly six of 10 Pakistanis view the United States as an enemy.