Schoolgirls and teachers sick from poison gas in Afghanistan 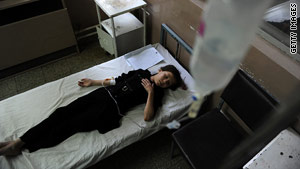 The latest incident, this one at a high school, is the ninth such case involving the poisoning of schoolgirls, said Asif Nang, spokesman for the nation's education ministry.

Dr. Kabir Amiri said 59 students and 14 teachers were brought to the hospital, and were faring better.

"We don't have good equipment to verify the kind of gas that they were poisoned with, but we have taken their blood tests to send to Turkmenistan for verifying the type of gas" that was used, Amiri said.

Many Afghan girls were not allowed to attend school during the Taliban's rule from 1996 to 2001. Girls' schools began reopening after the Islamist regime was toppled. The United Nations children's agency, UNICEF, estimates that 2 million Afghan girls attend school these days.

But female educational facilities, students and teachers have come under vicious attack as the insurgency has strengthened and spread from Taliban strongholds in the southern provinces of Kandahar and Helmand.

A report compiled last year by the humanitarian agency CARE documented 670 education-related attacks in 2008, including murder and arson. Much of the violence in what CARE called an "alarming trend" occurred at girls' schools.