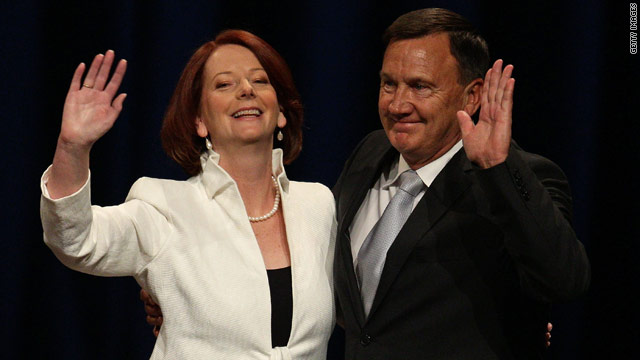 Sydney, Australia (CNN) -- Australia's political future hung in the balance after no clear winner emerged in Saturday's cliff-hanger election and a final outcome remained days away.

The results were "too close to call" a winner, said Prime Minister Julia Gillard, the Labor Party incumbent, in an address Saturday night to her supporters in Melbourne.

The winning party needs to secure 76 of 150 seats in parliament but analysts were predicting both parties would fall short. That means Australia could end up with its first hung parliament since 1940.

"There are anxious days ahead, but I will keep fighting," Gillard said.

Abbott said the exceptionally close results were an indication that Labor had lost its legitimacy.

"The coalition is back in business," he told supporters in Sydney. "The Australian people have responded to the policies we took forward to the election."

Voting is mandatory for adults in Australia, and more than 14 million were expected to cast ballots. A spokesman for the commission said he could not say when final results would be released.

Economic issues figured prominently in the campaign. Both candidates tried to convince a skeptical public that they could get the country back in the black within three years.

Australia has a historically low unemployment rate of 5.1 percent and the country was able to avoid recession during the recent worldwide economic downturn.

Both main parties promised to slash the country's modest deficit -- national debt is only 6 percent of gross domestic product -- and to return the country to surplus in three years.

Other contentious issues with voters included the way Australia will deal with asylum seekers, illegal immigrants and human smugglers, and whether it should embrace the Carbon Pollution Reduction Scheme.

Abbott leads the Liberal Party, which is nevertheless conservative and forms a center-right coalition with The Nationals. A fourth party, The Greens, is much smaller and has strong environmental ethos.

The two main parties have no massive ideological differences. Instead, many saw the election as a chance for voters to pass judgment on Labor's ouster of Kevin Rudd, who once enjoyed some of the highest popularity ratings of any Australian leader.

Rudd's poll numbers took a hit after he placed his proposed carbon emissions trading plan on the back burner and introduced a 40 percent tax on the country's powerful and wealthy mining industry.

That prompted many in his party to doubt whether he could lead the party to victory in the election, so Rudd stepped aside in June.

Gillard, born in Wales in 1961, moved to Australia with her family in 1966. After graduating with an arts and law degree in Melbourne, she worked as a lawyer before being elected to Parliament in the seat of Lalor, Victoria in 1998. She became deputy prime minister and minister for education, employment and workplace relations when Labor was voted into power in November 2007.

Her ascension to the prime minister's office has dogged Gillard, with some calling it a palace coup and referring to her as a backstabber. Liberal campaign ads have talked about Gillard's ruthless streak in giving Rudd "the chop."

Although Australia is a fully independent parliamentary democracy, the British monarch is head of state. Gillard said the country has a "deep affection" for the queen but, that she wants to see Australia make the transition toward a republic.

Abbott said he sees "no reason whatsoever" why the current constitutional arrangement should change.

Like Gillard, Abbott has ties to Britain. Born in London in 1957, he studied economics and law at the University of Sydney and was a Rhodes scholar at Oxford University.

He worked as a journalist for publications including The Australian newspaper, and was elected to Parliament in the seat of Warringah in 1994. He served in numerous posts during the government of John Howard, between 1996 and 2007, and last December he became leader of the opposition.