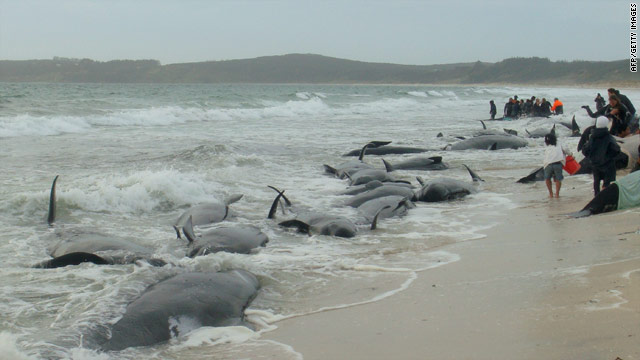 When conservation officials arrived, only 15 of the animals were still alive. The whales probably became stranded sometime during the night, said Carolyn Smith of New Zealand's Department of Conservation in Kaitaia, and that's why so many died before being discovered.

"The focus for everyone right now was to try to refloat the survivors," Smith said.

To do that, officials will position the whales to face out to sea and hope that they swim back out when high tide comes.

The whales "need to be held in the water for at least half an hour to allow them to reorientate themselves, before being released to hopefully swim back out to sea," the conservation department said.

A first attempt to refloat the whales was not successful Friday night. Conservation officials were going to monitor the animals overnight in the hope of trying again, maybe after moving them to Matai Bay, where sea conditions could be more favorable for refloating.

The next attempt would happen Saturday morning, said Mike Davies, acting area manager at the Department of Conservation's Kaitaia office.

Far North Whale Rescue, which has a team of trained volunteers, is working with the department to achieve this.

Currently, New Zealand's Far North region is experiencing heavy rain and wind, both a help and a hindrance to the rescue efforts, the Department of Conservation said. It means the whales are not at risk of drying out, but it creates difficult conditions for rescuers.

Adult pilot whales can measure up to 20 feet long and weigh up to 3 tons. Due to their social nature, they are often involved in mass strandings, according to the American Cetacean Society. The ACS is a non-profit group based in California that works to protect whales, dolphins and porpoises, according to its website.