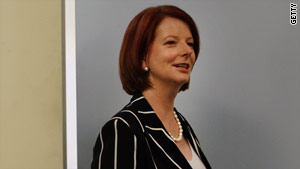 (CNN) -- An intuitive crocodile on Australia's northern coast is taking a bite out of the country's hotly contested national election by making his pick for prime minister.

His methods are unorthodox, especially compared with the button-downed academics of pollsters who are working feverishly to predict this ballot vote.

"We suspended a piece of chicken from each of the pictures of Gillard and Abbott after he had been put into his feeding position," Sallie Gregory, an employee of Darwin's Crocosaurus Cove tourist attraction, told CNN from Darwin City, the capital of Australia's Northern Territory.

"It took him five or six minutes to pick one ... then he took a couple of go's at Gillard before finally going for the chicken under Gillard," she said.

Gregory said they got the idea after hearing about the German octopus, 'Paul,' who correctly picked eight World Cup matches, including the final.

"The local paper here did a big feature on it," she said. "So, we thought the crocodiles might enjoy doing something different as well."

Gregory said Harry was born in the wild, but has been making his home at the Darwin facility the last few years.