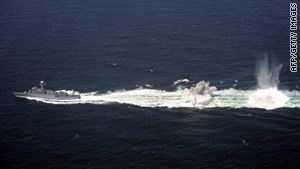 Washington (CNN) -- The United States and South Korean navies will begin a joint exercise off the western coast of the Korean peninsula in response to North Korea's alleged sinking of a South Korean warship last March.

South Korea maintains the Cheonan was sunk by a North Korean submarine.

"Following the Gates/Clinton meetings of their South Korean counterparts in Seoul last month, we said that we would continue a series of exercises that are defensive in nature, that are designed to send a clear message to North Korea," Pentagon spokesman Bryan Whitman said, referring to meetings by Defense Secretary Robert Gates and Secretary of State Hillary Clinton

"The next exercise in that series will focus on the anti-submarine warfare tactics, techniques and procedures," Whitman said Wednesday.

The anti-submarine warfare exercises will take place in early September in international waters in the Yellow Sea.

The Defense Department said recently that the aircraft carrier USS George Washington and its support ships would take part in the exercises, but Whitman said Wednesday it's unclear what U.S. Navy ships would be involved.

"The exercise is still very much in the planning stage so I can't really provide any more details than that," Whitman said.

The report, whose findings have been endorsed by the U.S., alleged that a North Korean sub sank the ship, the Cheonan, with a torpedo, killing 46 sailors. North Korea denies it sunk the ship.