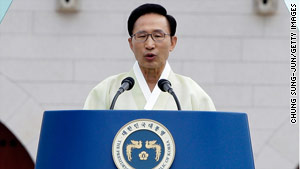 (CNN) -- North Korea said Sunday that it will "deal a merciless counterblow to the U.S. imperialists" and to South Korean "traitors," in response to word that the United States and South Korea will begin a joint military exercise on Monday.

"The military counteraction of the DPRK (Democratic People's Republic of Korea) will be the severest punishment no one has ever met in the world," a spokesman for the General Staff of the Korean People's Army said in a statement carried by North Korea's official news agency.

On Friday, the U.S. and South Korea announced that an annual joint military exercise would begin on Monday and last for 11 days. The drill is designed to ensure that the South Korea-U.S. military alliance is "fully prepared to respond to any potential provocations," according to a statement from U.S. forces in South Korea.

Tensions between North Korea on one hand and its southern neighbor and the U.S. on the other have escalated since a May report from Seoul, South Korea, blamed the North for the sinking of a South Korean warship in March.

The report, whose findings have been endorsed by the U.S., alleged that a North Korean sub sank the ship, the Cheonan, with a torpedo, killing 46 sailors. North Korea denies it sunk the ship.

In announcing its annual military drill with the U.S., South Korea's Ministry of National Defense said that "the exercise is going to be implemented in a more actual fashion than before due to serious security concern... following North Korea's deadly torpedo attack on South Korea's corvette Cheonan in March."

Earlier Sunday, South Korea's state media reported that President Lee Myung-bak has proposed a plan to reunite his country with North Korea and suggested a tax to prepare for the costs expected if the two countries come together.

Lee said the two countries should form a "peace community," and stressed the importance of the denuclearization of North Korea, Yonhap reported.

"It is imperative that the two sides choose coexistence instead of confrontation, progress instead of stagnation," Lee said, according to Yonhap.