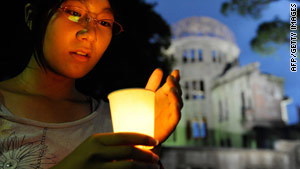 A Japanese girl prays for victims of the atomic bombing at Peace Memorial Park in Hiroshima on Thursday.

(CNN) -- U.N. Secretary-General Ban Ki-moon used an appearance at the Hiroshima Peace Memorial ceremony in Japan to advocate for his five-point plan for worldwide nuclear disarmament and nonproliferation.

August 6 marks the 65th anniversary of the atomic bomb dropped by the United States at the end of World War II on Hiroshima. Another was dropped a few days later on Nagasaki. The bombs devastated both cities and killed more than 200,000 people. Thursday was the first time a U.N. secretary-general took part in the ceremony.

"Together, we are on a journey from ground zero to global zero -- a world free of weapons of mass destruction," Ban said. "That is the only sane path to a safer world. For as long as nuclear weapons exist, we will live under a nuclear shadow."

This is Ban's first visit to Hiroshima. He also made the first visit of a U.N. secretary-general to Nagasaki when he participated in a wreath-laying ceremony on August 5.

Ban called for his plan for nuclear nonproliferation and disarmament to be acted upon. "It includes recommendations on security, verification, transparency, conventional weapons and the legal framework for nuclear disarmament," he said before laying the wreath in Nagasaki.

In Hiroshima, Ban noted recent success in the nonproliferation movement. "We see new leadership from the most powerful nations. We see new engagement in the U.N. Security Council. We see new energy from civil society," he said.

Ban cited the new Strategic Arms Reduction Treaty (START) between the United States and Russia, which would replace the 1991 START that expired last year. He also noted progress made at a nuclear summit in Washington earlier this year. "We will build upon [that] in Korea in 2012. ... We must keep up the momentum," he said.

Ban said he will convene a conference on disarmament in New York in September. "We will push for negotiations towards nuclear disarmament. A comprehensive nuclear test ban treaty. A fissile material cut-off treaty," he said.

Ban further advocated for "disarmament education" in schools, calling for the translation of survivor testimony in all the world's major languages.

"We must teach an elemental truth: that status and prestige belong not to those who possess nuclear weapons, but to those who reject them," he said. "Let us realize our dream of a world free of nuclear weapons so that our children and all succeeding generations can live in freedom, security and peace."

Ban said his experience of living through the Korean War as a child motivated him to be a leader who seeks peace. "One of my earliest memories is marching along a muddy road into the mountains, my village burning behind me," he said. "All those lives lost, families destroyed, so much sadness. Ever since, I have devoted my life to peace. It has brought me here today."