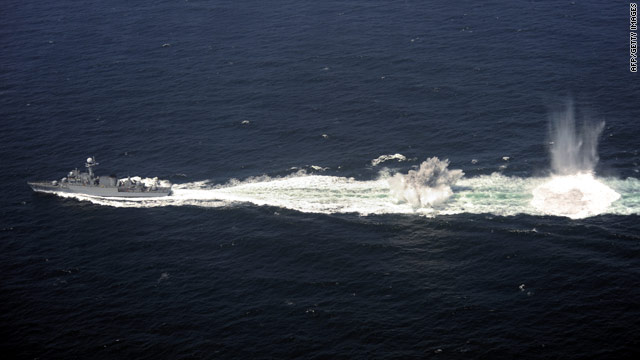 (CNN) -- In a move that is antagonizing North Korea and irking China, South Korea commenced a major naval exercise in the Yellow Sea Thursday, the largest since 46 South Korean sailors died in March in the sinking of a warship.

The five-day exercise involves some 4,500 personnel and all four branches of the military, according to South Korea's Yonhap news agency.

Prior to the Cheonan's sinking, the South Korean navy had largely discounted the threat of submarines in the Yellow Sea, due to the shallow waters in the area.

North Korea said via state media that it would undertake "strong physical retaliation" and warned fishermen to stay clear of the Northern Limit Line, the disputed maritime border between the Koreas.

The drills amount to an "undisguised military intrusion," Pyongyang has said.

"The army and people of the DPRK are closely watching every move of [South Korean President] Lee Myung-bak's group of traitors. And if the puppet warmongers dare ignite a war, they will mercilessly destroy the provokers and their stronghold by mobilizing most powerful war tactics and offensive means beyond imagination," the Secretariat of the Committee for the Peaceful Reunification of Korea said, according to North Korea's state-run news agency KCNA.

Meanwhile, China, which has refused to condemn North Korea over the alleged torpedo attack and which remains Pyongyang's closest strategic ally, is reportedly carrying out air defense drills on its Yellow Sea coast across from the Korean peninsula.

Given North Korea's decrepit military, experts say the chances of a naval attack on well-prepared South Korean forces are small.

"The North Koreans have to rely on asymmetric capabilities," said Dan Pinkston, who heads the international Crisis Group's Seoul offices. "In a straight-up fight they are not that capable."

Deadly North Korean strikes in past years -- a commando raid on the South Korean presidential mansion in 1968; terrorist bombings in 1983 and 1987; and naval clashes in 1999 and 2002 -- all used the element of surprise, an element that would be difficult to spring on the large, alert force South Korea is fielding for the maneuvers.

If North Korea retaliates, it will likely be with a weapons test rather than a direct confrontation, said one expert.

"They do not do eye-for-eye, tit-for-tat responses," said Choi Jin-wook of the Korea Institute of National Unification. "Shooting a missile or testing a weapon or some kind of diplomatic action are possible, but I don't think there will be a military reaction."

The exercise does not include any U.S. assets, leading some commentators to wonder whether Washington is wary of angering Beijing in the Yellow Sea.

South Korean and U.S. forces conducted exercises together in the Sea of Japan last month. Those exercises included an anti-sub infiltration component -- intended to thwart a submarine attack on a ship.

If the joint exercises continue, such a move could be part of a gradual build-up of American pressure on China.

"The U.S. is slowly containing China in other places, and they could exercise in the East Sea in the future," said the Korea Institute of National Unification's Choi. "I think the U.S. is very deliberately pressuring China."

The warship sinking has heightened tensions between the two neighbors who fought a war from 1950 to 1953. The war ended in an armistice, not a peace treaty, meaning the two nations are still technically at war. About 28,500 U.S. troops are stationed in South Korea.