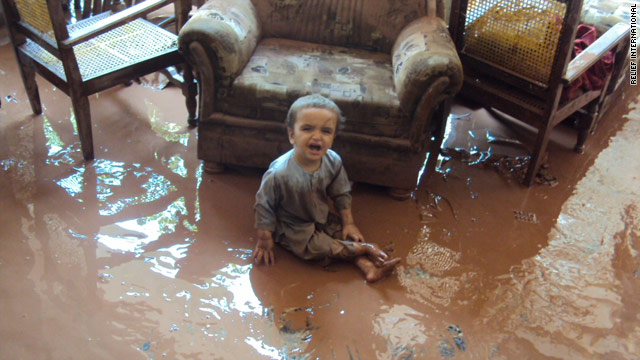 The United Nations now puts the number of people affected by floods in Pakistan at more than 4 million.
STORY HIGHLIGHTS

Chakdara, Pakistan (CNN) -- Floodwaters subsided Thursday in northern Pakistan's Swat Valley, where a fierce sun baked a thick carpet of mud into a brittle crust, as officials expanded their estimate of the number of people affected.

The monsoon rains that had transformed the usually placid Kabul River into a raging torrent that swept away houses, restaurants and hotels have stopped.

But the estimated toll on people will leave lasting repercussions -- 1,500 dead and more than 4 million affected.

In some areas, towns that were inundated earlier this week were teeming with traffic and pedestrians on Thursday as evacuees returned to assess the damage. Many survivors expressed fury with the government for what they considered to be its slow response. They also were angry with President Asif Ali Zardari, who was in Britain during the worst of the floods.

Fifty-thousand Pakistan army troops who fought the Taliban last year have been deployed to help in the fight with nature.

Army engineers are in demand to help replace the 91 bridges that have been swept away and to help repair the many others that were damaged.

Parts of the Swat Valley remain inaccessible by road; helicopters provide the only way in or out for people, food, clean water or medicine.

At Chakdara, south of Mingora, people queued for more than four hours to cross a rickety temporary suspension bridge across swirling brown water.

With the main highway crossing destroyed, people trying to escape were using a decrepit British-built 19th-century bridge that was damaged in the rains.

Dump trucks were carting in tons of rocks and earth to build a causeway to span the gap, dangerous work made more difficult by the force of the water below eroding the bank.

As many as 1,500 people have died in what officials have called Pakistan's worst flooding in 70 years.

The United Nations Office for the Coordination of Humanitarian Affairs put the number of people affected at more than 4 million and said Thursday that the flood wave of the Indus River was entering Sindh Province.

The National Disaster Management Authority estimated that more than 252,000 houses had been damaged or destroyed in the affected provinces.

Cases of diarrhea, typical in areas without clean drinking water, have been reported from six flood-affected districts in Khyber Pakhtunkhwa, it said.

Many of Khyber Pakhtunkhwa's northern districts like Kohistan, Lower Dir, Shangla and Upper Swat remained largely isolated, it said. It predicted that it would take weeks before electricity and other infrastructure are restored.

Electricity was restored Thursday in the lower-lying districts of Charsadda and Nowshera, where floodwaters had already receded, it said.

"Today is going better. It is sunny and drier, but the destruction is all around us. Most of the villages have been washed away," said Joseph Prior Tio, who is working in the Swat Valley with the aid group Medecins Sans Frontieres, also known as Doctors Without Borders.

Electricity and clean drinking water were in short supply. "We are fighting to get safe water to many areas," Tio said. "There is simply no electricity anywhere in the entire valley. All over the valley there are about 1 million people who depended on electricity to get basic services such as safe drinking water."

U.S. Secretary of State Hillary Clinton on Wednesday urged Americans to donate to relief efforts, saying that experience in post-earthquake Haiti showed that small donations can make a big difference.