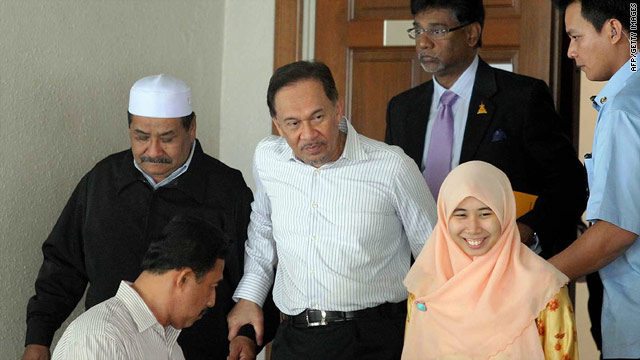 (CNN) -- The judge in the sodomy case of Malaysian opposition leader Anwar Ibrahim on Monday postponed the trial until August 9 because of allegations a female prosecutor had an affair with his accuser.

As a result of the allegations, the defense has asked that charges against Anwar be dropped.

A blogger reported last week that the female member of the prosecutor's office allegedly had an affair with the male aide who accused Anwar, 62, of sodomizing him at a luxury apartment in June 2008.

Sodomy, even if consensual, is punishable by 20 years in prison in the majority-Muslim country. Anwar has pleaded not guilty to the charge.

The prosecution said the woman has been removed from the team even though the allegations involving her haven't been verified. The prosecution must respond over the next week to defense charges that the case has be compromised.

Anwar has filed a police report against the woman and the 25-year-old male aide, accusing them of violating the country's Official Secrets Act. The defense team believes the aide may have had access to confidential trial information.

Investigators arrested Anwar in July 2008 -- four months after a loose coalition of opposition parties he led made gains on the ruling party in parliamentary elections.

"I don't believe that I'm going to get a fair trial," Anwar told CNN in February. "A fair trial would require a competent, independent judge to immediately strike out the charge because any sexual assault must have a case to support the charge."

Anwar has called his arrest a "dirty trick and conspiracy" orchestrated by authorities who are trying to discredit him.

"They think that by doing this they can frustrate the opposition because they think the coalition will be more fragile without me," said Anwar, who oversees a multiethnic opposition alliance and his own Justice Party. "Clearly they have underestimated the commitment of the (parties)."

Anwar was the heir apparent to former Prime Minister Mahathir Mohamad until 1998, when he was sacked and charged for corruption and sodomy. Anwar spent six years in prison after being convicted on corruption charges in 1999 and on sodomy charges involving his wife's former driver in 2000.

Malaysia's highest court overturned the sodomy conviction and ordered him released from prison in 2004. However, the corruption verdict was never lifted, barring him from running for political posts until 2008. A loose coalition of opposition parties -- with Anwar at the helm -- won 82 of 222 parliamentary seats in elections in March of that year. It was the second time in the country's history that the ruling party failed to gain the two-thirds majority needed to amend the constitution.

Anwar has said the investigators trying to build a case against him are the same ones who hid evidence that could have cleared him in his sodomy-related conviction in 1999.