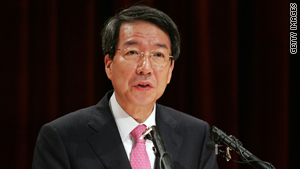 (CNN) -- South Korea's prime minister has offered to resign for a second time, the prime minister's office said Thursday, after failure to win parliamentary approval to stop relocation of government offices out of the capital, Seoul.

"I personally greatly regret that I couldn't complete the Sejong project, even though I've revised the project," Prime Minister Chung Un-chan said in a statement on his website. "I feel guilty that I couldn't prevent the waste of government resources and disorder it will bring (to the government)."

It was not immediately clear if President Lee Myung-bak would accept Chan's resignation.

Chung verbally offered to resign on July 5, but Lee did not accept his offer at that time. The offer came after failure to win parliamentary approval to stop the relocation effort, a major setback to Lee's government and a sign that his party is losing clout.

The president's Grand National Party has taken a beating in recent local elections, which analysts see as a referendum on his handling of the Cheonan incident.

The South Korean naval ship Cheonan sank March 26 in disputed waters. The loss of the ship and 46 sailors raised tensions on the Korean Peninsula.

North Korea has vehemently denied charges it fired a torpedo that sank the Cheonan.