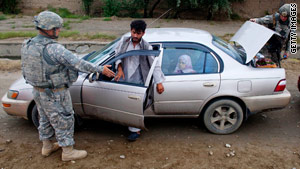 Petty Officer 3rd Class Jarod Newlove, 25, of Renton, Washington, was one of two sailors involved in a firefight on Friday in eastern Afghanistan. They were traveling in Logar province when they were attacked, the military said.

The sailor died of wounds he sustained from the firefight when the two sailors were captured, Darwish said.

Newlove had five gunshot wounds, including one to the head, Darwish said.

The government asked the local elders of the province to form a committee and talk to the Taliban in order to retrieve the missing sailor. Because of the negotiations with the elders, the Taliban gave the body back without submitting any demands, Darwish said.

On Monday, Taliban spokesman Zabiullah Mujahid said one American died in a firefight and the other was being held by the group. Mujahid said the two Americans were driving in a civilian vehicle in the village of Dasht, in Charkh district.

The Taliban wanted to take both men alive, but the firefight broke out, killing one of the Americans, Mujahid said. The other was alive and being held in a safe location, he said at the time.

Newlove's family released a statement through the Navy asking that the media release no details of the incident or information about the family.

Darwish said he learned from locals that McNeley was killed. He said the body was found in the Patanak Mountains of Charkh district. He also said the vehicle the men were driving was located Sunday.

There had been no immediate demands by the Taliban for the return of the Americans because the group was still deliberating what its demands would be, Mujahid said.

CNN's Barbara Starr and Atia Abawi contributed to this report