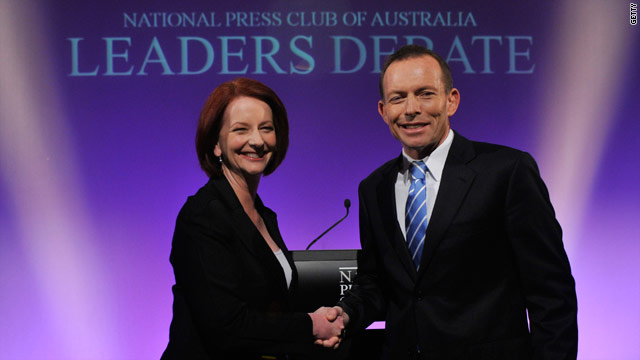 (CNN) -- Australian Prime Minister Julia Gillard and opposition leader Tony Abbott moved their only televised election debate so they wouldn't clash with the finale of "MasterChef Australia" Sunday -- but their switch forced Kylie Minogue to change her schedule.

The politicians didn't want to go up against the cooking showdown, Australia's most popular program, so they started their debate an hour earlier than tradition dictates.

That should have put them up against "Dancing With the Stars," where Kylie was scheduled to make a guest appearance, Australia's Daily Telegraph reported.

The Australian pop star is making her first round of appearances on television Down Under in a decade.

Channel 7, the network that shows "Dancing with the Stars," is known for its news coverage, so they had little choice but to cover the debate, the channel's head of programming told the Daily Telegraph.

"We didn't really have any option -- we're the number one for news and we have to cover the election debate live. It was a very short discussion," said the channel's head of programming, Tim Worner.

That pushed Kylie's "Dancing with the Stars" show back an hour -- putting it into competition with "MasterChef."

About 1.3 million people watched "Dancing with the Stars" last week, according to Worner.

Gillard last week called an election for August 21. She ousted Kevin Rudd as leader of Australia's Labor Party, and prime minister, in June.

Gillard was Rudd's deputy prime minister, but Labor Party members of Parliament voted her into the top job as Rudd's public approval declined.

Conservative opposition leader Tony Abbott was quick to condemn Gillard's government when she called the election.

"The prime minister wants to move forward because the recent past is so littered with her own failures," he said.

Gillard, a 48-year-old lawyer, said when she became prime minister that she was aware the move made her the nation's first woman in that position, "and maybe the first redhead."

But, she said at the time, "I didn't set out to crash my head on any glass ceilings; I set out to keep my feet on the floor."

Since taking over, she has established a sizable lead in public approval polls over opposition leader Abbott.

A Herald/Nielsen poll released just before the election was called said 56 percent of those surveyed preferred Gillard as prime minister, while only 35 percent supported Abbott.