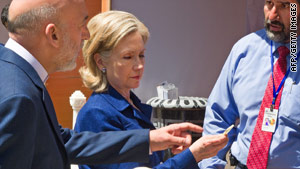 (CNN) -- Several insurgents were killed and two were detained while troops were looking for a Taliban facilitator who was believed to be in the final stages of planning an attack against an international conference in Kabul, authorities said Tuesday.

U.S. Secretary of State Hillary Clinton is attending the gathering, known as the Kabul Conference.

The operation occurred Monday night near Kabul, the International Security Assistance Force said in a statement.

Troops targeted a compound and were fired upon as they approached, the statement said.

Video: Is Afghanistan war worth it?
RELATED TOPICS

After a gun battle, the NATO-led coalition force was able to enter the compound, detain the two suspects and confiscate several automatic weapons.

The alleged facilitator was not captured, a spokesman with the coalition force said.

Meanwhile, a service member with the International Security Assistance Force was killed in a roadside bombing in southern Afghanistan Tuesday, the force said.

Per policy, the agency did not release any further details.