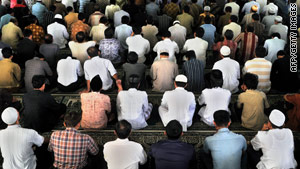 Jakarta, Indonesia (CNN) -- Indonesian Muslims have been praying in the wrong direction, the country's highest Islamic authority has said.

The Indonesian Ulema Council told the country's Muslim populace in March to turn west when they offered their daily prayers. Muslims are supposed to face the Kaaba, the religion's most sacred site in the city of Mecca in Saudi Arabia.

At the time, the council said that the direction of Kaaba from Indonesia laid to the west.

Turns out, it didn't. Africa did.

So, on Friday, the council issued a new edict: face northwest.

"After the first fatwa (edict) a few months ago that stated that the praying direction is west, we have announced that the correct direction for praying is indeed northwest, and we have issued a new fatwa (edict) to correct it," said Ma'ruf Amin, the head of fatwa division in the Indonesian Ulema Council.

"This is important because facing west will mean that people were facing Africa when they pray," he said.

Amin said the new edict does not mean that mosques in the country will need to be torn down. "They (those praying inside) just need to adjust their praying direction slightly," he said.

Some residents of the world's most populous Muslim country took the change in stride.

"I don't really worry about the praying direction," said Riza Irwansyah, an office worker in Jakarta. "The important thing is I prayed to Allah and I believe He will listen, no matter which way I'm facing."