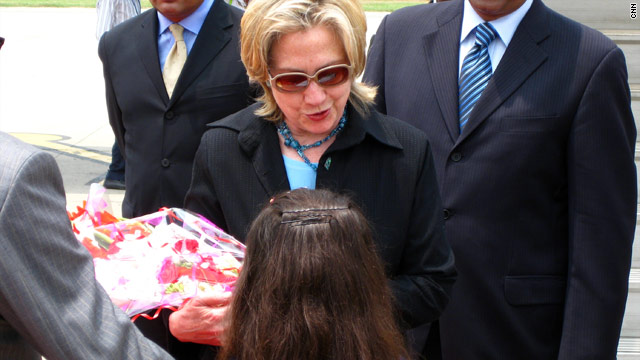 Hillary Clinton is greeted by a well-wisher after her arrival in Islamabad on Sunday.
STORY HIGHLIGHTS

Washington is hailing the deal as the most significant bilateral treaty yet between the estranged neighbors, both of which are U.S. allies in the battle against al Qaeda and the Taliban. The agreement was 46 years in the making but pushed by the Obama administration over the last 15 months, senior U.S. officials said.

"Bringing Islamabad and Kabul together has been a goal of this administration from the beginning," said Richard Holbrooke, the U.S. special representative for the region. "This is a vivid demonstration of the two countries coming closer together."

Clinton arrived in Pakistan early Sunday as Washington struggles to change its relationship with "one of the most critical countries in the world," according to a top U.S. official. The secretary is on her way to Afghanistan, but the visit to Pakistan is just as important, Holbrooke said.

The top leaders of the al Qaeda terrorist network, the perpetrators of the September 11, 2001, attacks on New York and Washington, are believed to be hiding along the rugged Afghanistan-Pakistan frontier, while U.S. and allied troops are battling Taliban militants in Afghanistan and nuclear-armed Pakistan is battling its own Taliban insurgency.

Holbrooke said to make progress, "we need to change the core of the relationship" between the United States, Pakistan and Afghanistan.

Clinton is scheduled to announce a "massive" list of aid projects for Pakistan on Monday, according to a senior U.S. official who did not want to be named talking about the announcements before they are made. And she is expected to talk about U.S. plans to spend billions of dollars on social, economic and infrastructure development, especially in Pakistan's tribal region.

"No country in the world is getting as much attention by the United States or more support because no country is more important," the official said.

In the past year, the United States has started engaging Pakistan more, according to Vali Nasr, a senior adviser to Holbrooke. The process included Clinton's visit to the nation last October, an that trip was followed by various high-level visits that have made Pakistan more aware of U.S. intentions, said Nasr.

Anti-American sentiment is widespread in Pakistan, and the United States hopes to build more trust between the two countries. But there is "a huge trust gap" that won't be overcome quickly, Nasr said.

"We are not going to be able to change their foreign policy on a dime," he said.

Clinton is also likely to discuss U.S. plans to help with Pakistan's energy and water shortage. She will then continue on to an international conference in the Afghan capital Kabul on Tuesday, and stop in South Korea and Vietnam before heading home.