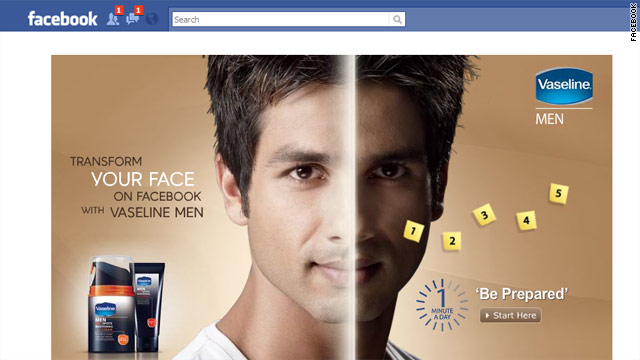 Vaseline's new skin-lightening app on Facebook has come in for criticism from some users in India.
STORY HIGHLIGHTS

London, England (CNN) -- Vaseline's new skin-lightening application for Facebook users in India has re-ignited the debate over skin color and perceptions of beauty.

The app, which was launched by Vaseline, invites Indian men to download their profile photos and drag a line across the screen to digitally "Lighten my Skin."

It is being used to promote Vaseline Men UV Whitening Body Lotion, a new product launched in India in June into an already crowded market for skin-lightening creams.

On the Facebook page inviting reviews of the product, users have left a string of angry comments. One wrote: "I wish I could rate this less than 1...racist application. India has the biggest double standards. Imagine the horror and uproar if this were published by a western country."

Another said he condemned the ad campaign, writing "It is insidious of them to take advantage and make profit out of a bias that unfortunately exists in the Indian society."

Vaseline issued a statement defending the application and the company's promotion of the product in India.

Much like self-tanning products in North America and Europe, skin lightening products are culturally relevant in India
--Company statement, Vaseline

"Much like self-tanning products in North America and Europe, skin lightening products are culturally relevant in India," the company said.

"In India, men use these products to lighten and even out their natural skin tone and to reduce the appearance of spots while protecting their skin from the sun.

The Facebook application was created for the Indian market as a culturally relevant and engaging way for Indian men to interact with this product," it added. The site makes clear the application was not created by Facebook.

Bangalore-based businessman Kunnath Santhosh set up his own Facebook page three months ago to campaign against so-called "fairness" creams in India.

Santhosh said the company's reference to the creams' "cultural relevance" was a "poor excuse" for exploiting consumers who believe lighter skin will brighten their prospects.

"Non-tanned skin is not a basis for discrimination in U.S. and Europe. It is a lifestyle option there. You don't find anyone looking for a bride who is tanned in U.S., do you?" he said, referring to classified ads in India specifying a preference for paler skin.

He said the application was the latest evidence of what he calls the "'I want to be fairer' craze" sweeping India. Santhosh calls the creams "unacceptably racist" and has urged the Indian government to ban them.

"My son saw one of the ads on TV showing his favorite hero Shahrukh Khan (a popular Bollywood superstar) peddling a whitening cream and he told me that he wants to be fairer and that he is ugly," Santhosh told CNN in an email.

"Now, for a parent who thinks his son is blessed with good health and looks, I found it deeply offensive... There are way too many companies offering such products and people use it without any regard for the consequence on their health and self-esteem," he wrote.

For a parent who thinks his son is blessed with good health and looks, I found it deeply offensive...
--Kunnath Santhosh
RELATED TOPICS

At the time, it was the first skin-whitening cream to target the male market. It now claims to be the world's number one "fairness" cream for men. The first lightening creams for women were launched nearly 30 years ago.

The description on the product's Web site reads: "A fair complexion has always been associated with success and popularity. Men and women alike desire fairness, it is believed to be the key to a successful life."

Around 240 products promising lighter skin have been launched in India in the last five years, according to data from market research company Mintel.

Nica Lewis, the company's beauty analyst, described skin-lightening products as "an established trend" in Asia with India by no means the largest market for such products.

According to Mintel, More than 2,800 products promising to lighten skin have been launched in China in the past five years. During the same period, more than 1,000 hit shelves in Japan, and around 560 in the Philippines.

Lewis told CNN that similar products are on the market in the West, but different terminology is used to promote them.

"The whitening trend in the West has been repositioned as brightening and lightening. And even in Asia now they are starting to use similar terminology," she said.

Manit Malhotra, a 20-year-old single student from Pune, in western India told CNN that he doesn't agree there is pressure on men in India to have paler skin.

He has used both the Vaseline application on Facebook and the cream. Malhotra refuted the suggestion that the Vaseline Facebook application was racist, saying "Never... I don't think that. This product is only for our face-care. That's it."