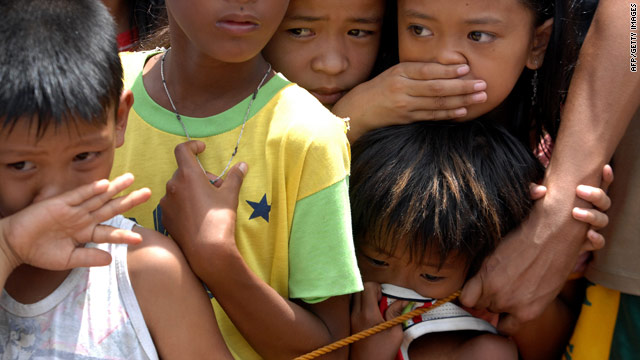 Children recoil at the sight of a body that was recovered Friday after Typhoon Conson struck Mariveles, Philippines.
STORY HIGHLIGHTS

Hong Kong, China (CNN) -- Tropical Storm Conson was downgraded from a typhoon early Saturday, a day after the deadly storm roared into China, along the southern tip of the island of Hainan.

Conson is forecast to move through the Gulf of Tonkin on Saturday, making a final landfall in northern Vietnam, near Hanoi, in the afternoon, according to CNN World Weather.

The storm, which killed at least 39 people during its westward march across the Philippines this week, had maximum sustained winds of 112 kph (70 mph) Saturday, according to the Joint Typhoon Warning Center. At one point Friday morning, the storm's winds reached 139 kph (86 mph), making it the equivalent of a Category 1 hurricane when it reached China.

Southern China already had been battling severe flooding that killed 146 people over the past two weeks, destroyed about 113,000 homes and forced more than 1.2 million people to relocate this month, state media said Friday. Forty people were missing.

According to the state-run Xinhua news agency, Chen Lei of the State Flood Control and Drought Relief office said the coming rain would exacerbate the flooding.

Storms and floods have affected more than 35 million people in 10 China provinces this month. By Thursday, the nation had recorded at least 26 billion yuan (about $3.8 billion) in economic losses, Xinhua said.

Conson had weakened from a typhoon to a tropical storm before its landfall late Tuesday in the Philippines, but that didn't keep the storm from wreaking havoc as it traversed the archipelago off the Asian mainland. Conson then traveled across the South China Sea, picking up strength.

Along with the rising death toll, the Philippines' National Disaster Coordinating Council said Friday that 84 people were missing.