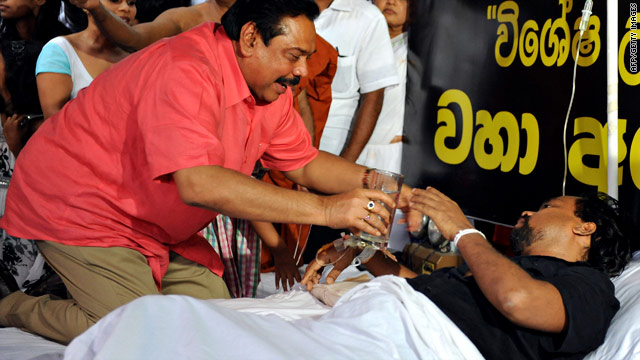 Colombo, Sri Lanka (CNN) -- A Sri Lanka politician ended his "fast unto death" on Saturday when the nation's president gave him water and an ambulance rushed him to a hospital.

Wimal Weerawansa, who had been the construction minister and is currently a member of parliament, was on his fourth day of the fast amid protests against the United Nations.

He said he would go without food until U.N. Secretary-General Ban Ki-moon dissolves a three-member panel looking into human rights abuses in the final stages of a decades-long war that ended in 2009 between the government and the Tamil Tiger rebels.

During the fast, Weerawansa's Cabinet colleagues visited him in a special tent outside the U.N. compound in Colombo. He was on a mattress on a specially-constructed dais protected by plain-clothed security. Visits by ministers signaled government backing for Weerawansa's protest against the United Nations.

Doctors warned Weerawansa earlier Saturday that his condition was worsening and administered saline to him. President Mahinda Rajapaksa walked up the dais and gave a bottle of water to Weerawansa. He was then taken to a hospital.

The event was shown on local TV and has been widely reported.

The United Nations and other countries have expressed dismay at the blockade of the U.N. compound and Weerawansa's leading role in the protest. The U.N. office continued to function with limited staff.

The United Nations has been concerned about accountability issues related to the rebels' defeat, including alleged war crimes by troops and rebels -- allegations that both parties deny. Weerawansa has said Ban intends to bring the Sri Lankan president before a war crimes tribunal.

"We will not allow that to happen," Weerawansa told a news conference earlier in the week.

Weerawansa resigned his ministerial portfolio yesterday on Friday, but government sources say he will be sworn in again.