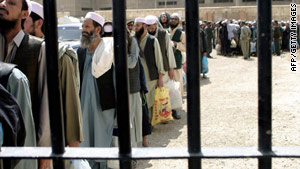 (CNN) -- Former British army officer William Shaw, who was serving a two-year sentence in Kabul's infamous Pul-e-Charki jail for bribery, has been acquitted, his daughter told CNN on Sunday.

Daughter Lisa Luckyn-Malone could not provide additional information. Afghan officials could not immediately be reached for comment.

Shaw, who served 28 years in the British forces, was sentenced for bribery in April -- accused of paying $25,000 to an Afghan intelligence official.

Bribery under Afghan law requires the person who received the money to be a government employee. That was not the case for Shaw, according to his lawyer, Kimberly Motely.

Shaw's employer, security company G4S, authorized him to pay the $25,000 in good faith as a fee to the Afghan intelligence service to have two vehicles released from their custody. That was in October 2009, and the vehicles were released.

The former military serviceman who once received a top award from the Queen was sent to the Afghan super-max jail and locked up in solitary confinement.

The Afghan intelligence service had sent two letters to the judges dealing with Shaw's case informing them the man who took the $25,000 from Shaw was not a government employee, according to Motely.

The British Embassy in Afghanistan said it was pleased for Shaw and his family.

"We welcome the appeal court's decision which is now subject to finalization in the Supreme Court," an embassy spokeswoman said. "The UK continues to strongly support the work of the Afghan government to counter corruption and reinforce the rule of law in Afghanistan."