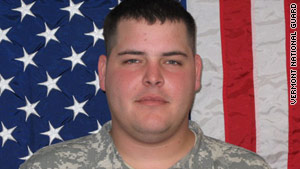 Kabul, Afghanistan (CNN) -- A 25-year-old soldier from Vermont was killed in a bomb attack in Afghanistan, the Vermont National Guard said Saturday night.

"Specialist Grady has made the ultimate sacrifice on behalf of a nation that he both loved and served as a member of the Vermont Army National Guard," said Maj. Gen. Michael Dubie, Vermont Adjutant General.

He joined the U.S. Army in 2003 and took part in military operations in Iraq from February 2005 through January 2006.

He was given the Purple Heart for injuries he suffered during Operation Iraqi Freedom, the National Guard said.

In October 2006, he transferred to the Vermont Army National Guard.

Two years later, he transferred to a battalion in Oklahoma, but returned to duty in the Vermont National Guard in September 2009.

He leaves behind his parents, two brothers, a wife and a daughter.