Grim numbers posted in June for troops in Afghanistan 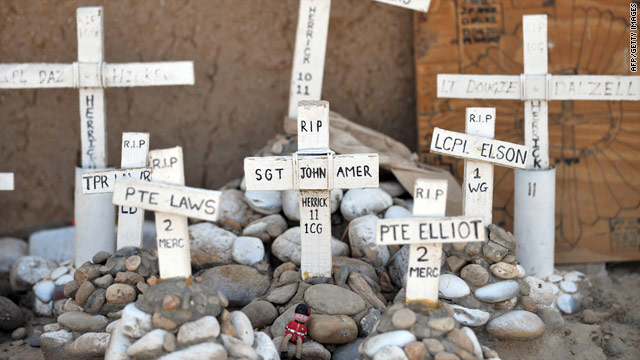 A commemorative memorial to British soldiers has been placed at a patrol base in Helmand province.
STORY HIGHLIGHTS

Kabul, Afghanistan (CNN) -- The Senate confirmed Gen. David Petraeus to take over as the top military commander in Afghanistan on a grim day for international troops fighting there.

The June death toll for NATO-led forces reached 101 on Wednesday, the highest ever in a single month since the war began almost nine years ago. The deadliest month previously had been August, 2009, when 79 soldiers died.

A service member died Wednesday of wounds sustained in an small arms attack by insurgents in eastern Afghanistan, the military said. No other details, including name and nationality, were immediately available.

The grim reality of June comes as the situation in Afghanistan is intensifying, as is concern at home over Washington's strategy.

That controversy sparked debate about the best way to defeat the insurgency.

About 130,000 foreign troops are stationed in Afghanistan and Obama wants to send 20,000 more. But he has said he will start withdrawing U.S. troops in July 2011.

Petraeus supports that plan but many of Obama's critics in Congress do not.