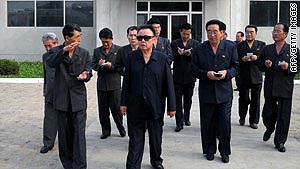 An announcement by the ruling Workers' Party of Korea says it hopes to make "great changes" as it marks its 65th anniversary this year.

"We are now faced with the sacred revolutionary tasks to develop the WPK ... into an eternal glorious party ... and further increase its militant function and role to glorify the country as a country prosperous and powerful socialist nation," the announcement said.

Leader Kim Jong Il is believed to grooming his son, Kim Jong Un, as his successor. Recent dramatic changes in North Korean leadership appear to be paving the way for an eventual transfer of power, analysts say.

Earlier this month, Jang Song Thaek, Kim's brother-in-law and long thought to be his right-hand man, was promoted to vice-chairman of the powerful National Defense Commission, state media said.

Jang's appointment is crucial, said Kim Sung-han, a professor at Korea University in Seoul. Jang provides a support network for Kim Jong Un, who is his nephew. Jang is also a top military official, according to the professor.

His appointment signifies the power succession process is taking place and that he plays a key role as "liaison between the party and the military," the professor said.

The 68-year-old leader of the communist nation suffered a stroke last year.