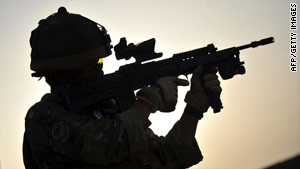 (CNN) -- June has become the deadliest month of the Afghan war for coalition troops, a grave milestone in the nearly nine-year-old conflict.

Four British soldiers were killed in a "vehicle incident" on Wednesday in southern Afghanistan, bringing the month's death toll to 80, a CNN count shows.

The grim development comes amid tumult among the war's leadership, with top military commander Gen. Stanley McChrystal resigning over disparaging comments he made about civilian officials in a magazine interview. He is to be replaced by Gen. David Petraeus, now head of U.S. Central Command and the architect of the surge strategy in the Iraq war.

The four British soldiers were serving in northern Nahr-e Saraj of Helmand province as part of a police advisory team, according to Britain's Ministry of Defence. More than 300 British troops have been killed in the Afghan war.

Along with Britain, troops from the United States, Australia, Canada, France, Denmark, Romania and Poland have died this month.

Many military deaths have occurred in bombings, and civilians have also died in similar incidents. NATO's International Security Assistance Force said seven construction workers in Uruzgan province were killed by a remote-controlled bomb.

"Our nation is at war," President Obama said Wednesday in his remarks at the White House about McChrystal. "We face a very tough fight in Afghanistan."