Chinese announce soccer gambling bust made ahead of World Cup 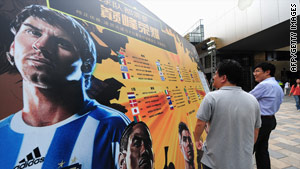 (CNN) -- Police in China said they broke an illegal soccer gambling ring ahead of the World Cup in South Africa, the state-run Xinhua news agency reported on Tuesday.

The bust was made in Shenyang, the capital of the northeastern province of Liaoning. Forty-eight people were taken into custody, the report said, citing police.

Police told Xinhua on Tuesday they investigated what they called a major web soccer gambling case and made the bust after a two-month probe.

Police said the operation got going in November and was broken in early March amid a government-wide crackdown on online gambling launched in February.