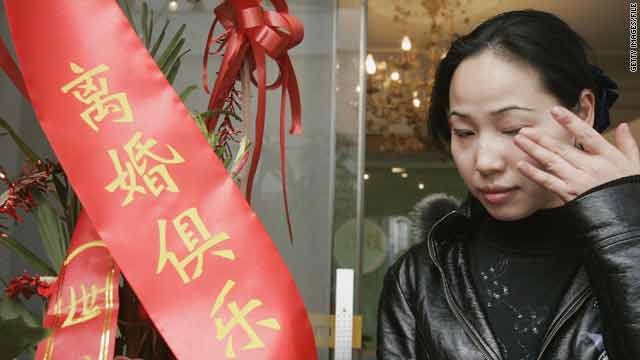 Beijing, China (CNN) -- TV actress Tang Yi has been married to a film director for over 10 years, but it's been a rocky marriage. "I did not get along with my in-laws, but my husband kept taking their side," she told one of her friends. "He was a sort of momma's boy." Last year, the free-spirited thirtysomething decided she had enough. She got a divorce.

Though there is still stigma attached to a broken marriage, changing social mores and socio-economic relationships are prompting a record number of unhappy couples to untie the knot. Divorce -- Chinese-style -- is on the rise.

In 2009, one in five Chinese marriages ended in divorce, according to a report by the Ministry of Civil Affairs. The report said 1.71 million Chinese couples broke up last year -- 160,000 couples, or 10.3 percent, more than the previous year.

The figures follow an upward trajectory. Last year the divorce rate -- the number of divorces per 1,000 people -- stood at about 1.85 per thousand. In 1985, the figure was only 0.4 per thousand.

The trend is significant because Chinese culture has long leaned heavily against divorce. An ancient proverb admonishes newlyweds to "be married until your hair turns white." In the old feudal culture, it was shameful for women to marry more than once. Divorced women were considered disgraceful failures and were called "po xie (old shoe)." But for men, divorce has been traditionally easy.

In 1950, the Chinese government enacted China's first marriage law. It banned arranged marriages, concubinage and child betrothal. It allowed divorce but only after "mediation and counseling" had failed. Still, China in the 1950s saw a surge of politically driven divorces as many Chinese opted out of arranged marriages.

In 1981, a new law was enacted which granted divorce if one party is found guilty of extramarital affairs, domestic violence, and addiction to drugs or gambling. It also accepted "complete alienation of mutual affection" as grounds for divorce and allowed one party to ask for it, even if the other party opposed.

Just seven years ago, couples needed written permission from employers or neighborhood committees to end marriage. Many couples were forced to stay in "dead marriages" just to keep their privacy and avoid public stigma. In 2003, however, a revised marriage law dropped that requirement and simplified procedures, allowing couples to get their divorce certificates more easily.

"Deng Xiaoping's open-door and economic reform policies have made Chinese richer, freer, and more independent-minded," noted Victor Lee, a film producer. "These social changes are reflected in recent movies and television series, which depicted love triangles and other marital problems." While Lee bemoans the breakup of families, he cheers "the economically empowered women dumping their immoral husbands."

Tang Jun, a researcher at the think tank Chinese Academy of Social Sciences, attributes the spike to changes in the mindset and behavior of the young generation, who are typically single-child born in the 1980s. "They are better educated than their parents, are more independent economically and have developed a stronger sense of self, which tends to wreck marriages more easily," Tang was quoted as saying by the Global Times.

Fickleness is also blamed for some of the breakups. A Beijing couple in their late 20's, for example, got married merely a few months after they met -- a practice the Chinese call "shan hun," or "blitz marriage." But when she discovered he was still sending text messages to his ex-girlfriend, they divorced in a similar blitzkrieg fashion.

Such impetuous behavior alarms some Chinese officials. Hei Xinwen, a delegate to the National People's Congress, China's legislature, last March proposed a mandatory "cooling off" period to give squabbling couples time to save their marriage. He blamed the high divorce rate on "too simple procedures" to secure divorce.

Linda Jaivin, a sinologist and writer, sees no reason for alarm. "It means China is becoming much more like everywhere else," she said. "On the other hand, it also has something to do with the growing materialism in the society. Marriage has become a material arrangement at heart and not a heart arrangement at heart."

Author of "A Most Immoral Woman," a love and lust story set in China and Japan in 1904, Jaivin believes this mind-set mirrors the changes in Chinese society. "People have to rely on themselves to feed and clothe and house themselves," she said. "They can't really rely on the state to look after them, and people have become practical in that way."

Such marriages, she said, tend to be fragile. "When people get married with a very strong sense of material benefit, things can get rather wrong and people do not necessarily have a will to make it go right again," she explained. Whereas when two people fall in love, okay, the romance wears off, but love deepens in other ways, and they learn to adjust and they decide it's worth it."

Some marital experts, however, see a positive side to the rise in broken marriages. Whereas in the past marriage was primarily an economic proposition, many Chinese now place a premium on mutual affection, compatibility and even sexual satisfaction.

In spite of the rise in divorces, marriage remains appealing to many Chinese. The same report of the Ministry of Civil Affairs revealed that more than 24 million people tied the knot last year. Officials say many of them were divorcees.