Around 300,000 people displaced inside Kyrgyzstan 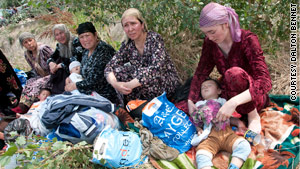 Uzbekistan has been providing assistance and shelter to an estimated 100,000 people from Kyrgyzstan.
STORY HIGHLIGHTS

(CNN) -- About 300,000 people are now estimated to be internally displaced in Kyrgyzstan by ethnic violence, the U.N. refugee agency said Thursday, citing information from the Kyrgyz interim government and non-governmental organizations.

Families and host communities were sheltering many of them, but at least 40,000 people were in need of shelter, according to the Office of the U.N. High Commissioner for Refugees.

The violence between Kyrgyz and Uzbeks in southern Kyrgyzstan has calmed down after it erupted late last week. The UNHCR saying as many as 180 have died and around 1,900 have been injured.

The agency said the situation in Osh and nearby villages "appears to be volatile" and conditions in Jalal-Abad are tense. Many families have left from Osh and Jalal-Abad for Bishkek and other areas.

UNHCR and other U.N. humanitarian agencies are working to get supplies into the region. Internally displaced people are those who have left their homes but remain inside their country, and refugees are people who have fled the country.

As for Kyrgyz refugees, Uzbekistan has been providing assistance and shelter to an estimated 100,000 people who've fled there, a flight that has strained the health care and food sectors of Uzbekistan. Several dozen female refugees crossed the border pregnant and have given birth, the United Nations said.

The United Nations said it is assessing the situation for refugees now, and Elisabeth Byrs, spokeswoman for the U.N. Office of Coordination for Humanitarian Affairs, said an appeal for help will be issued soon.

Some Chinese nationals chose to remain in Kyrgyzstan, Sun said.