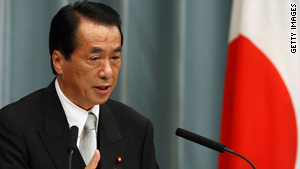 The upper house of the Diet, Japan's parliament, was expected to confirm Kan as prime minister in a vote scheduled later Friday.

The vote came a few hours after the Democratic Party of Japan tapped Kan to lead the party.

Hatoyama, who announced his resignation Wednesday during a live broadcast of an address to party members, watched from the audience as Kan spoke.

"I have had many shortcomings, I have been allowed to lead all of you for the past eight months to today. I am extremely grateful for having been given this opportunity," Hatoyama said during his resignation speech.

In addition to serving as finance minister in the Hatoyama administration, Kan served as deputy prime minister. But Kan will be a rare political breed for a Japanese premier: His family has not produced another prime minister or state minister, which could play well with a Japanese public that has seen several sons and grandsons of former ministers in the past year ascending to the premiership only to step down again a few months later.

As a former health minister, Kan gained popularity with voters after exposing a government cover-up of HIV-tainted blood products that caused thousands of hemophilia patients to contract the virus that causes AIDS. As a state minister for economy, he was not shy to talk about the foreign currency exchange rate. In January, he was supportive of a weaker yen to help the export-driven Japanese economy.