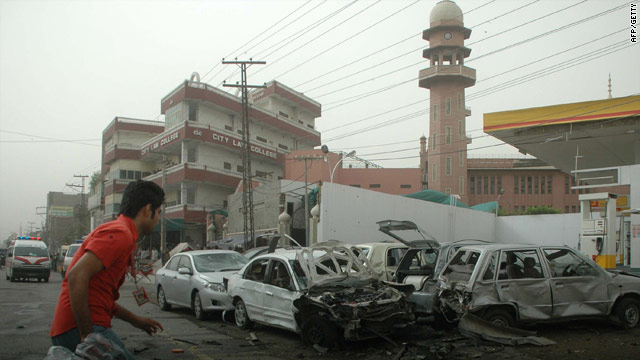 Islamabad, Pakistan (CNN) -- The death toll from Friday's attacks on a religious minority in Lahore has risen to 98, officials said Saturday.

The strikes with bombs and firearms took place at two mosques in Lahore belonging to the Ahmadi religious group, police and rescue officials said.

At the Baitul Noor place of worship in the Model Town region, two attackers on motorbikes fired at the entrance of the building and tossed hand grenades, a rescue official told CNN. Police said one of the attackers was critically injured. The other, clad in a suicide jacket, was detained.

At a mosque in the Garhi Shahu neighborhood, one witness told CNN he saw two attackers armed with AK-47s, and another witness said he saw at least four gunmen. Sajjad Bhutta, the senior official, said the heads of three suicide bombers were discovered there.

Bhutta said more than 70 people were injured in the violence.

Ahmadis regard themselves as Muslim. But the government says they aren't, and many Muslim extremists have targeted them. Sunni and Shiite Muslims do not regard followers of the religion as Muslims because they do not regard Mohammed as the last prophet sent by God.

The Human Rights Commission of Pakistan, a non-governmental organization, deplored the attacks and said it has warned the Punjab provincial government about threats to the Ahmadi community center in Model Town for more than a year. Lahore is the capital of Punjab province.

"An HRCP delegation had held meetings with Chief Minister Punjab Shehbaz Sharif to apprise him of the situation and had demanded enhanced security measures to protect the vulnerable minority and its worship places. HRCP is of the view that though the Punjab government apparently took some steps to bolster the security ... they were not enough to face the well-coordinated and well-planned terrorist attack as witnessed on Friday," it said.

It urged the government "to provide foolproof security and protection to the Ahmadi community."

The movement was founded in 1889. Its followers believe that Mirza Ghulam Ahmad (1835-1908) was sent by God as a prophet "to end religious wars, condemn bloodshed and reinstitute morality, justice and peace," the worldwide Ahmadi group says.

The religious freedom commission, an independent, bipartisan U.S. government body, said in its latest annual report that "Ahmadis may not call their places of worship 'mosques,' worship in non-Ahmadi mosques or public prayer rooms which are otherwise open to all Muslims, perform the Muslim call to prayer, use the traditional Islamic greeting in public, publicly quote from the Koran, or display the basic affirmation of the Muslim faith."

While the greatest number of its followers are in Pakistan and India, it has a presence in many European countries, such as Britain, where the religion's fifth and current spiritual head, Mirza Masroor Ahmad, resides.