North Korea warns it will meet war with 'all-out war' 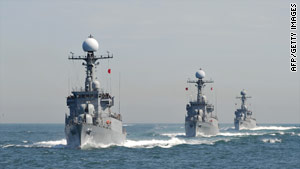 "Now that the puppet group challenged the DPRK [North Korea] formally and blatantly, the DPRK will react to confrontation with confrontation, and to a war with an all-out war," according the KCNA news agency.

The news agency referred to South Korean leaders as a "group of traitors" and said they would experience "unheard of disastrous consequences" if they misunderstand North Korea's will.

The response comes amid high tensions on the Korean peninsula, after Seoul blamed Pyongyang for the sinking in March of a South Korean warship. An official South Korean report has accused the communist North of firing a torpedo at the ship, killing 46 sailors.

Explainer: Why are the two Koreas so hostile?

U.S. Secretary of State Hillary Clinton, visiting Seoul on Wednesday, called the sinking "an unacceptable provocation by North Korea" and said the international community should respond.

Also Thursday, the general staff of North Korea's military -- the Korean People's Army, or KPA -- said it was enacting new measures to deal with any "all-out confrontation."

The steps would "retract all measures for providing military guarantees for the North-South cooperation and exchange, and the promise of a physical strike.

"The KPA will make a prompt physical strike at the intrusion into the extension of the Military Demarcation Line under our side's control in the West Sea of Korea," the army said, according to the KCNA news agency.