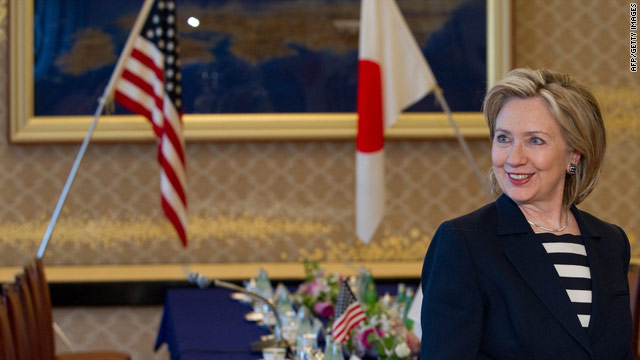 The standoff between North and South Korea over a s

U.S. Secretary of State Hillary Clinton said Friday that North Korea must faces consequences after a report that it fired a torpedo that sank a South Korean warship in March.

"I think it's important to send a clear message to North Korea that provocative actions have consequences," she said amid heightened tensions and a diplomatic war of words between Seoul and Pyongyang over the incident. "We cannot allow the attack on South Korea to go unanswered by the international community."

Clinton was speaking in Tokyo, Japan, for the first leg of her week-long tour in Asia. She said she was consulting with international allies to find the appropriate reaction.

North Korea threatened to back out of a nonaggression pact between the nations, while the South Korean president accused its northern neighbor of engaging in military provocation, South Korea's Yonhap news agency reported on Friday.

"Firstly, from now on (North Korea) will regard the present situation as the phase of a war...", the North's Committee for the Peaceful Reunification of Korea said Friday, according to Yonhap.

South Korean President Lee Myung-bak, meanwhile, said that North Korea's alleged torpedo attack on a South Korean warship was tantamount to a military provocation and that it violates the armistice agreement between the nations, Yonhap reported.

South Korean military officials on Thursday announced the results of an official investigation into the sinking of the ship, the Cheonan, which concluded that North Korea fired a torpedo that cut the vessel in half.

South Korean President Lee Myung-bak vowed Thursday to take "resolute countermeasures" against North Korea for its alleged attack, according to his office.

On Friday, North Korea said it would scrap its nonaggression pact with South Korea if Seoul attempts to punish it for the sinking of the warship, South Korea's Yonhap news agency reported.

Should South Korea take steps to retaliate, North Korea will "strongly react to them with such merciless punishment as the total freeze of the inter-Korean relations, the complete abrogation of the north-south agreement on nonaggression and a total halt to the inter-Korean cooperation undertakings," the committee's statement said, Yonhap reported.

North Korea denied Thursday that it sunk the warship, which went down on March 26, killing 46 sailors.

"We had already warned the South Korean group of traitors not to make reckless remarks concerning the sinking of warship Cheonan of the puppet navy," North Korea's national defense commission said in a statement Thursday responding to the investigators' report, according to the Korean Central News Agency.

"Nevertheless, the group of traitors had far-fetchedly tried to link the case with us without offering any material evidence," the statement said.

The South Korean military group that presented its report on the ship's sinking Thursday comprises experts from South Korea, Australia, Sweden, the United Kingdom and the United States.

"The evidence points overwhelmingly to the conclusion that the torpedo was fired by a North Korean submarine," said Dr. Yoon Duk-yong, the group's co-chair.

"There is no other plausible explanation," he said.

China asked both sides to stay calm to avoid an "escalation of the situation," said the country's foreign affairs ministry spokesman Ma Zhaoxu.

U.S. Joint Chiefs of Staff Chairman Adm. Mike Mullen said the status of the 28,500 U.S. troops in South Korea has not changed because of the findings.

"They are on their normal state of readiness. They are engaged very routinely out there," Mullen said.

"Firstly, from now on (North Korea) will regard the present situation as the phase of a war
--Yonhap cites Committee for the Peaceful Reunification of Korea as saying
RELATED TOPICS

The United States is bound by treaty to assist South Korea if it goes to war.

Japan said it stands behind South Korea. "We had received extensive explanation from the ROK [Republic of Korea] side prior to today's announcement," Prime Minister Yukio Hatoyama said in a statement.

"On this basis, Japan strongly supports the ROK. North Korea's action cannot be condoned by any means, and Japan together with the international community strongly condemns North Korea," the prime minister said.

"In handling this matter, Japan will continue its close coordination and cooperation for regional peace and stability with the countries concerned, including the ROK and the United States."

Military and civilian briefers said that damage to the Cheonan's hulk and injuries on the bodies of the sailors were consistent with the kind of "shock-wave and bubble effect" produced by a homing torpedo attack. Seismic data, witness statements and computer modeling provided further corroboration, Yoon said.

Briefers displayed torpedo parts recovered from the Cheonan wreck site: part of a motor, a shaft and parts of the propeller. Korean writing, with the words "Number 1" were inscribed on fragments of the weapon. The parts displayed in a glass case were compared and shown to be identical to the blueprint of a 7.35 meter torpedo, obtained from a North Korean weapons export brochure.

International members of the investigative team agreed with the conclusions.

"We worked closely and collaboratively, using separate tools and methods," said Adm. Thomas Eccles of the U.S. Navy, adding that all members of the international team were in agreement.

Military officials also identified what they believe to be the type of vessel responsible.

"A few small submarines and a mother ship supporting them left a North Korea naval base in the West Sea [Yellow Sea] two - three days prior to the attack," Yoon said, citing information gathered by a multinational task force made up of Australia, Canada, South Korea, the UK and the U.S.

The likely culprit was a midget submarine of the Yeono ("Salmon"), a vessel equipped with night vision equipment, Han said.

This is not the first clash the two Koreas have had near the maritime border.

In 1999 and 2002, there were fatal naval clashes between surface patrol boats near the inter-Korean maritime border in the Yellow Sea. A November shooting incident also may have killed North Korean sailors.

However, the use of a submarine is a significant escalation in terms of weapons used. It's also the deadliest North Korean attack since the bombing of a South Korean airliner killed 115 people in 1987.

Gen. Park Jung-i, who co-chaired the investigative committee, said that South Korea would give the evidence to the Armistice Commission that oversees the ceasefire that ended the 1950-1953 on the Korean peninsula. The commission would make the findings available to North Korea, he said.

Asked what defensive moves the South Korean navy is taking to prevent a recurrence, Han said that that the navy would establish anti-submarine detection measures, but admitted the difficulty of detecting an underwater submarine once it has left its base.