Indians flock to marry and shop on lucky day 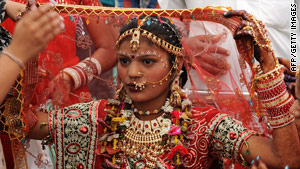 (CNN) -- Tens of thousands of Indian couples tied the knot Sunday, one of the luckiest days in the Hindu calendar.

"There are 50,000 weddings happening today" in Mumbai alone, said wedding planner Jarret D'Abreo of Marry Me.

Marry Me is working only one, but is consulting on seven others, Marry Me's Candice Pereira told CNN.

"It is impossible to find wedding vendors or venues at short notice for a highly auspicious date. The wedding that we are working on has been booked eight months in advance," explained Pereira, the company's creative head and co-founder. "We have had a lot of couples seek our help to secure venues and other vendors at the last moment.

"Also, most other vendors that we work with have in excess of five functions today due to it being a highly auspicious date," she said.

There are only a few lucky dates per year in the Hindu calendar. Sunday's is called Akshaya Tritiya.

"All the stars are aligned during this day. Whatever offerings and work you do on this day will go right. It's one day of the year which will bring immense good luck," Indian astrologer R.K. Sharma said.

On Akshaya, "none of the bad karma or defects in your birth chart matter. It's a very good day to make a new start to life," he said.

The exact date of the festival is based on the alignment of the moon, the stars and the planets.

It marks the date "the Hindu god Lord Parasurama (an incarnation of Lord Vishnu) came to earth in the form of a human being," the astrologer said, invoking a Hindu concept that has been widely appropriated in the Internet age -- the avatar. In Hinduism, the word refers to the earthly incarnation of a god.

"Whatever is celebrated during this day -- be it purchasing a car or a house or gold or even getting married -- brings good luck and that effect is multiplied. It's the most auspicious day of the year," Sharma told CNN by phone.

The festival is driving up sales in India's jewelry shops, one merchant said.

Vummidi Bagaru Jewellers had about twice as much daily trade as usual, and could reach three times as much, partner Jiphendra Vummidi told CNN by phone from Chennai.

People made plans in advance to make their purchases on Akshaya, he said.

"They're purchases they wanted to get for a wedding or an occasion -- jewelry predominantly, but bullion coins are also being bought," he said.

"It's a day when you could do anything good and it's supposed to help you do that good through the year," he said of Akshaya.

"It used to be that people used to feed people on that day. Now with the economic boom, people have more money and they prefer to buy gold as security in a crisis," he said. "They feel that if they buy gold today, they will have the capacity to buy gold this year."

Gold is hovering around record prices.

Vummidi said that was part of a supply-and-demand effect on sales and prices around Akshaya.

"They are not buying as much as I think they would have bought if the price was stable," he said. "Most people in the (gold) trade know about this day and feel that prices could be up for this day and then they could fall."

Big stores ran full-page advertisements in newspapers, inviting customers to go on a buying spree on the lucky date.

One newspaper ad even offered Hindu hymns as ring tones on mobile phones.

But this is no free service. At the bottom of the ad, cell-phone companies listed prices for ordering holy downloads.

CNN producer Harmeet Shah Singh in New Delhi said he got unsolicited text messages on his phone from businesses and advertisers ahead of the festival.

One sample read: "This Akshaya Tritya bring home prosperity! Book your apt (apartment)...". The message included a chance to win a gold coin on a booking of a home worth at least 1.6 million rupees ($34,000).

There are about a billion Hindus in the world, experts estimate, making it the third largest religion after Christianity and Islam.