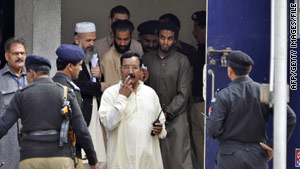 Islamabad, Pakistan (CNN) -- Five Americans on trial in Pakistan on terrorism charges appeared at a brief hearing Saturday, but did not face the detailed questioning they had expected.

The hearing at the jailhouse in Sargodha, Pakistan, lasted about half an hour. All five suspects submitted their written statements, and the next hearing was set for June 9.

The men's defense attorney, Hassan Dastagir Katchela, had told CNN he expected the five to be questioned in detail about the charges Saturday. It wasn't immediately clear why they only submitted written statements.

Katchela has said he is confident the college-age men, who face life in prison if convicted, will be proven innocent and released soon. He called the allegations against them "fake and baseless."

The trial of the men opened on the last day of March, with the defense accusing Pakistani authorities of fabricating evidence that the Americans plotted attacks on Pakistan.

Their lawyers said the men planned no such terrorist attacks and were implicated by Pakistani authorities, who were under intense pressure to bring an indictment. The defense has said it believes some of the evidence obtained on the suspects' computers could have been manipulated.

Katchela said all prosecution witnesses have been cross-examined, and he believes the defense will rest its case soon, perhaps "following two more hearings after which the judge could rule on the case."

The group has been called the D.C. Five because they all lived around the U.S. capital. They have been charged with several terrorism-related counts, including criminal conspiracy to commit terrorism and waging war against Pakistan and its allies, including the United States.

The five Americans -- Ahmed Abdullah Minni, Umar Farooq, Aman Hassan Yemer, Waqar Hussain Khan and Ramy Zamzam -- used to worship together at a mosque in Alexandria, Virginia, until they went missing in November and turned up in Pakistan. They were arrested in December in Sargodha, about 120 miles south of Islamabad, after their parents in the United States reported them missing.

Zamzam's mother, Amal Khalifa, said last month the five men went to Pakistan for a wedding without telling their parents and were watching television when 30 armed men put guns in their faces and took them away. She said authorities held the men for 36 hours without food or water.

Khalifa said that during a visit with her son in prison and in a letter, Zamzam claimed the men were tortured into confessing. Nadeem Kiani, a spokesman for the Pakistani embassy in Washington, has denied the allegations.

Pakistani authorities have described the men as intent on waging holy war against "infidels for the atrocities committed by them against Muslims around the world."