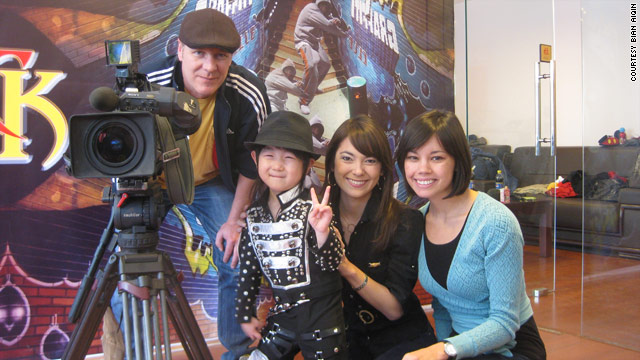 Beijing, China (CNN) -- I first encountered Xiao Bao at a Beijing dance studio. He was wearing a Mickey Mouse T-shirt, zooming around the room, passing out lollipops and bottles of Cokes his parents had brought for our CNN crew. He seemed just like any other four-year-old, incredibly cute, giggly and overwhelmingly energetic.

Then he made a quick change, throwing on a black and gold costume and sunglasses, and suddenly he was China's youngest Michael Jackson impersonator.

As soon as the music started playing he started hip-hopping, pop and locking and moonwalking -- like a pro. My favorite part was that he moved his mouth to the English lyrics to "Dangerous," without actually saying them out loud or understanding what the lyrics mean.

At the end of his routine, he held his last pose an extra few seconds to get the appropriate amount of applause and ooh-ing and aww-ing. He definitely basked in the attention. When asked to tell us his favorite singer, Xiao Bao said in his limited English, "My-co Jay-ke-sun!" Then he collapsed into a fit of giggles.

Wang Yiming, famously known as Xiao Bao (which means "little treasure" in Chinese), first started performing when he was two years old, in a provincial children's talent competition. By the time we met him he had already danced his way through national competitions and television shows. These days, the aspiring "prince" of pop has gone global.

Earlier this year, Xiao Bao rocked out on the "Ellen" show in Los Angeles. Ellen Degeneres, a dance-lover herself, seemed quite impressed.

The attention and travel has been more than his parents could have ever hoped for. Xiao Bao was born extremely premature, weighing just over two pounds.

"The doctor told me they couldn't guarantee anything," his mother Bian Aiqin says. "It would be a miracle if Xiao Bao survived."

Their doctor advised them to assist Xiao Bao in doing physical exercises to build his strength.

"But he was too small for exercises," his mother recalls. "So we decided to play music for him, hoping he'd move to the beat."

"To our surprise he was so attracted to the music. He stopped crying the moment he heard the melody," Bian says. When he got bigger he started dancing.

Xiao Bao's parents admit he has not led a normal childhood. After they discovered his love for dancing, the family moved from neighboring Hebei Province to Beijing so Xiao Bao could practice at China's best hip-hop dance studio six times a week.

Their little YouTube sensation continues to appear on television and most recently performed at the Shanghai World Expo. He's met celebrities from NBA superstars to Mickey Mouse himself (during a trip to Disneyland courtesy of "Ellen").

Xiao Bao is currently home schooled, but his mother says she hopes to put him back into regular school when his schedule allows for a normal routine. But they insist they're doing this only because he wants to.

His teacher agrees. "It's normal that when he's not practicing he's just moving around," says hip-hop coach Yang Ling. "Dancers need that kind of desire to perform whenever, wherever."

"He's still a child and there's a long life ahead of him," Xiao Bao's mother adds adds. "Nobody knows what will happen. So all I want is for him to be happy now."

His father, Wang Xiaojun, agrees, "His happiness is dancing."

As we finished our shoot and departed the studio, Xiao Bao still clad in his Michael Jackson costume gave each of us a kid-sized goodbye hug.

No less energetic than when we met him, he bounded into his mother's arms for another afternoon of MJ tunes as China's little Prince of Pop.