Reporter: Bangkok sniper bullet 'felt like it grazed my head' 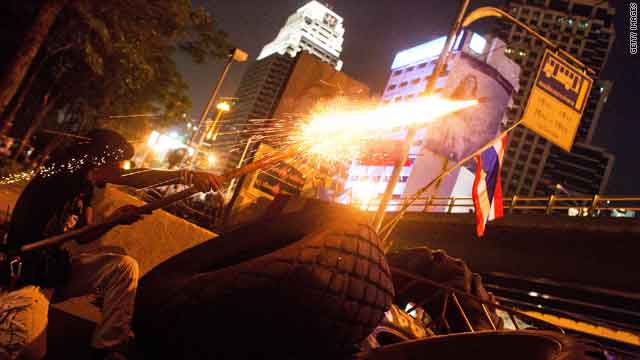 A protester fires a homemade rocket toward Thai security forces from behind barricades Thursday night in Bangkok.
STORY HIGHLIGHTS

(CNN) -- A journalist who was interviewing a key political protest leader in Bangkok said the sniper bullet that struck the man came so close that it "felt like it grazed my head."

Describing a chaotic scene on the streets of the Thai capital Thursday night, Thomas Fuller of the International Herald Tribune described to CNN how Maj. Gen. Khattiya Sawasdipol was shot in the head as he was interviewing the opposition figure.

"I was facing him, he was answering my questions, looking at me and the bullet hit him in the forehead, from what I could tell," Fuller told CNN's Michael Holmes. "It looks like the bullet came over my head and struck him. I don't have any way of confirming this beyond what I remember from the scene, but it felt like it grazed my head."

Fuller and other journalists were interviewing the general -- better known as Seh Daeng -- in makeshift barricades that protesters have set up in downtown Bangkok.

Video: 'Bullet came over my head'

The United Front for Democracy (UDD) has turned the posh commercial center of Bangkok into a makeshift fortress, as they continue to demand that Prime Minister Abhisit Vejjajiva dissolve the lower house of Parliament and call new elections.

iReport: Are you there? Send your images, video

Fuller said he was just inside the barricades when he was interviewing Seh Daeng. The opposition figure was facing out of the barricades and into Bangkok's business district of tall office buildings.

"He was standing in the same location for a while when I was talking to him but he was moving around, he was gesticulating," Fuller said. "He wasn't standing still, he was bobbing his head."

Seh Daeng did not appear to be armed or have bodyguards but was dressed in camouflage jacket and a floppy hat, Fuller said. The opposition leader was listed in critical condition from the shooting, his guards said.

Violence erupted after Thai authorities set a new deadline to seal off the Bangkok intersection where protesters have gathered by the thousands for the past month.

The government said it has been forced to take action after demonstrators disregarded an ultimatum by Abhisit to vacate the intersection by Wednesday. The Red Shirts support former Prime Minister Thaksin Shinawatra, who was ousted in a bloodless military coup in 2006.

Seh Daeng -- or Red Commander -- is a controversial public figure, even within the protest movement, Fuller said. Some Thai opposition leaders see him as an impediment to a peaceful resolution to the political stalemate that has gripped Thai politics, Fuller said.

"He's a renegade in all sense," Fuller said. "He's a renegade from the army, a hardliner within the protest movement. He told me today he thought they (other opposition leaders) were being cowardly, and he wanted to carry on."

More than two dozen civilians and military personnel have died in police-protester clashes in the ongoing unrest.