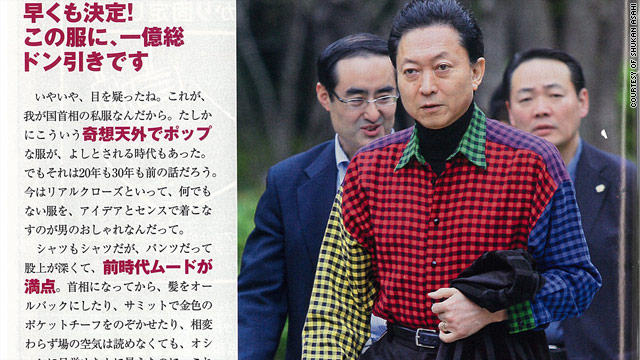 Japan's Prime Minister Yukio Hatoyama came under fire for this outfit he wore at a Japanese BBQ he recently organized.
STORY HIGHLIGHTS

Tokyo, Japan (CNN) -- Japan's prime minister is in a world of political hurt right now. The latest poll numbers by the country's largest daily newspaper, The Yomiuri Shimbun, showed 24 percent of those polled approve of Yukio Hatoyama's performance, a nine-point drop from a month earlier, while 67 percent disapprove of him.

So when Hatoyama recently opened the doors of his official residence to serve Japanese barbeque to ordinary voters for an event called the "Real Hato Café," his earnest effort to talk to ordinary citizens didn't grab the attention of critic Don Konishi -- but his choice of clothing did.

A multi-colored, throwback to the 1980s fashion disaster, Konishi explained, as he noted the prime minister's red, yellow, green, purple and blue-checked plaid shirt. The critic wrote a public condemnation about the shirt in a national magazine and warned the country that the multi-colored get-up represented what the poll numbers already show: Hatoyama is out of touch.

"This shirt comes from the '80s or '90s. His ideas and philosophy are old. Japan is facing a crisis and we can't overcome it with a prime minister like this."

It's the latest crime in a long fashion rap sheet, said Konishi, as he highlighted other multi-colored shirts, mauve coats, and what Konishi calls the biggest faux pas -- the hearts and pink blazer outfit.

On the day Konishi spoke with CNN, he wore white-rimmed glasses, silver shoes and a small brimmed hat.

"A fashion designer like me can wear this, but not the leader of Japan," he said.

Konishi feels so strongly about Hatoyama because the country felt passionately about the prime minister, who stormed into power last August in a historic wave of voter discontent. The Democratic Party of Japan unseated the Liberal Democratic Party, a ruling party that held power in the country for nearly 50 continuous years.

In office, the prime minister and his wife have been a fascinating new sort of first couple for Japan.

Mrs. Hatoyama, a published author, had previously published a tale in which she wrote that she had lived a previous life and in it, met American actor Tom Cruise. In another public admonition, she told a talk show that she gets energy by "eating the sun." The prime minister, shortly after his election, became a radio sensation when an old song of his -- a lounge tune recorded decades ago called "Take Heart" -- hit the airwaves.

In the early months, the country embraced the quirks of the Hatoyamas. But then frustrating stalemates began to crop up in his administration -- primarily, criticism over Hatoyama's handling of the move of a U.S. base on the island of Okinawa.

Those polled in The Yomiuri Shimbun said he has been wishy-washy on finding a solution for the Okinawans.

The criticism of the shirt may seem catty and unimportant, but it's a bad sign, said Keith Henry, a government affairs consultant at Asia Strategy.

"As a politician, you want to have the focus on policy and your agenda. I think the press and the Japanese people have lost patience with him; patience to the extent that they're no longer paying attention to his policy proposals because no one has faith in his ability to implement them."

"The press and the media are starting to nitpick on, really, things that are irrelevant to the future of the Japanese people but I would expect that to continue. Whether he's not dressing properly, goes to the wrong restaurants, spends too much on dinner, what his wife is wearing. It goes from the politics of policy to the politics of personality. And that doesn't help Japan."

The poll numbers are not lost on the man who is the subject of the study. Hatoyama told reporters: "I take it seriously that my approval ratings are down significantly. But I'm not going to quit."