Philippine gay party on ballot for the first time 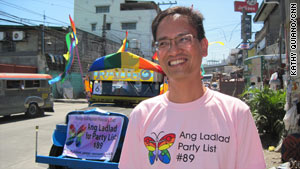 (CNN) -- A gay political party will be on the ballot Monday for the first time in the Philippines, where eight out of 10 households are Roman Catholics.

The elections will determine whether Ang Ladlad ("Out of the Closet") -- which represents lesbians, gays, bisexuals and transgender Filipinos (LGBT) -- will get the maximum three seats allowable for a marginalized or underrepresented party in Congress.

"We consider it a milestone in Philippine human rights," said Leila De Lima, head of the Commission on Human Rights of the Philippines. "They are really always victims of discrimination, exclusion and even violence."

The Commission, citing The Universal Declaration of Human Rights and International Covenant on Civil and Political Rights, sided with Ang Ladlad when its legal fight to stand for elections reached the Supreme Court.

Leading the five nominees under Ang Ladlad's banner is its national secretary of seven years, Bemz Benedito, who is transgender and also works for Senator Loren Legarda, herself a vice presidential candidate and Ang Ladlad supporter.

"We are running a common platform of equal rights, not special rights," said Benedito.

Topping Ang Ladlad's five-plank agenda is support for the Anti-Discrimination Bill that would criminalize discrimination on the basis of sexual orientation and gender identity. The bill has been filed multiple times in the Philippines Congress to no success.

The four other items on Ang Ladlad's platform are:

• Support for LGBT-related and LGBT-friendly businesses

• Setting up of microfinance projects for poor and disabled LGBT Filipinos

• Support for the repeal of the Anti-Vagrancy law, a tool that Ang Ladlad says has been exploited to extort members of the LGBT community.

Absent is same-sex marriage, which has slowly become legalized in other parts of the world. "We've done surveys -- we're going to lose on this one," said Ang Ladlad founder Danton Remoto, pointing to the predominance of Catholicism. "We're not going to push this. We focus on human rights first."

Also absent from the platform is a gender recognition bill, which would recognize transgender people and allow them to legalize the names they identify with.

On the Commission on Elections' (COMELEC) Web site, Benedito and another Ang Ladlad candidate, Naomi Fontanos, are listed under their male birth names. But Benedito prefers the female "Bemz," as opposed to her birth name, "Bembol Aleeh," and Fontanos -- chair of the Society of Transsexual Women of the Philippines (STRAP) -- is listed as "Tito Paulo."

"That's our struggle," said Benedito. "Even if our members have gone through gender reassignment surgery, they are not allowed to change their names to male or female, [unless] there is a typographical error."

One of the biggest challenges Ang Ladlad faces are the "immoral" and "abnormal" labels that the Commission on Elections and an official of the Catholic Bishops' Conference of the Philippines (CBCP) have used against them.

"My faith is always direct to God, and I believe he's also created us," said Benedito, a Roman Catholic who once studied at an all-boys Catholic school. "It's not up to these priests [to say] what is moral and what is not."

Speaking with CNN by phone on Tuesday, Caloocan Bishop Deogracias Iniguez, Jr. stood by his earlier well-publicized comments against Ang Ladlad's inclusion on the ballot.

"Personally, I'm not in favor of the party, because it's a group that's of abnormal human persons, according to what we accept as the order that the Creator has made for human persons," said Deogracias, who chairs the CBCP's public affairs permanent committee. "Human society -- we have male and female, so whatever is outside is abnormal. As with any other people, they are members of society. We respect them, we can tolerate them, we are compassionate, but we cannot sanction what they are doing."

In a separate phone conversation earlier, CBCP's media office director Pedro Quitorio said the body has not yet issued a formal statement on Ang Ladlad.

As recently as a month ago, the Commission on Elections had denied Ang Ladlad's registration twice in four years -- first for a lack of members and then on moral grounds. In its latter dismissal, the commission cited Ang Ladlad's tolerance for "immorality which offends religious beliefs" and then quoted the Bible, the Koran and then the Law Department's definition of the civil code.

Is Ang Ladlad the world's only gay political party?
In 2007, an Israeli, Hagai Eyad, announced the formation of the Magi, or "Gay Party in Israel," to run for the Knesset after plans for a Jerusalem gay pride party were quashed. The effort did not materialize, and no party ran.

Between 1999 and 2005 the Gay and Lesbian Alliance, founded by Juan Elys [elsewhere spelled "Uys"], existed as a political party in South Africa, according to EISA, a South African-based nonprofit organization which promotes credible elections, human rights and democracy in Africa.
RELATED TOPICS

The case reached the Philippine Supreme Court, which on April 8 ruled in favor of Ang Ladlad and ordered COMELEC to grant accreditation.

"The denial of Ang Ladlad's registration on purely moral grounds amounts more to a statement of dislike and disapproval of homosexuals, rather than a tool to further any substantial public interest," the court said in its ruling.

The party has had barely a month to campaign. "So, wherever we go, we say, 'Number 89,'" Remoto said, referring to its placement on the long ballot with 186 other "party-list" groups, which together would comprise one-fifth of the House of Representatives.

Ang Ladlad, which estimates 25,000 members, has received an "outpouring of support" from politicians, as well as from nuns and priests who cannot outwardly express it, Remoto said.

"Whether they win or lose, what's important is, they're on the ballot, and people are given the chance to vote for them and other parties," Senator Chiz Escudero said by phone of Ang Ladlad.

Escudero, an independent, rallied the party to endorse presidential candidate Senator Benigno Aquino and vice presidential candidate Jejomar Binay. Such a combination is a mixed-ticket, considering Aquino belongs to the Liberal Party, and Binay is on the PDP-Laban ticket as Aquino rival and former President Joseph Estrada's running mate.

Remoto pointed to corruption as the Philippines' main problem and referred to Aquino as the "Mr. Clean of Philippine politics." Binay, the mayor of Makati, has a track record as a human rights lawyer and a gender rights agenda in his platform, Remoto added.

That Ang Ladlad may be the only gay political party in the world hasn't been disputed so far.

Sam Cook, communications and research director, of the New York-based International Gay and Lesbian Human Rights Commission, said she was not aware of details of any other.

The Washington-based Gay & Lesbian Victory Fund and Leadership Institute, which supports LGBT candidates to all levels of office, said there has not been an equivalent in the United States, where same-sex marriage and military policy toward gays have generated significant debate.

"Well-known openly gay candidates and elected officials in the U.S. have almost always been affiliated with either the Democratic or Republican parties, with the Democrats fielding far more out candidates than Republicans," Denis Dison, vice president of external affairs, wrote via e-mail.

Public perception of gays in the Philippines has changed in the past 20 years, said Remoto, who teaches at Ateneo de Manila University.

"We made homosexuality a topic everyone can discuss openly," he said.