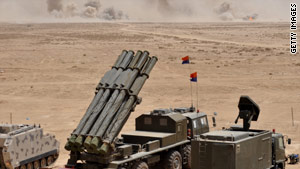 Both the Shaheen-1, which can hit a target 400 miles (650 kilometers) away, and the Ghazvani, with a range of 180 miles (290 kilometers), were fired successfully, Pakistan military officials said.

Prime Minister Yousaf Raza Gilani, who witnessed the event with several senior military officials, said that the nation had developed a strong nuclear deterrence capability, according to a government statement.

He said that Pakistan's armed forces were "fully capable of safeguarding Pakistan's security against all kinds of aggression," according to the statement.

Gilani mentioned last month's Nuclear Security Summit hosted by President Obama in Washington, an event aimed at enhancing international cooperation to prevent nuclear terrorism. Much of the event focused on Iran's nuclear program, which has drawn deep concerns from the West.

However, the international community also has had concerns about the stability of the Pakistani government and the security of its nuclear arsenal, questioning whether it's safe from the hands of the Taliban.

Gilani on Saturday said the world can now move "beyond safety and security concerns," the statement said. "These were laid to rest at the Nuclear Security Summit where Pakistan forcefully projected a forthright stance on the issue and the world expressed satisfaction at Pakistan's nuclear security arrangements."

Estimates of Pakistan's nuclear arsenal currently range from 60 to 100 weapons. It first declared its status as a nuclear power in 1998, testing five bombs in an exchange with its south Asian archrival, India.