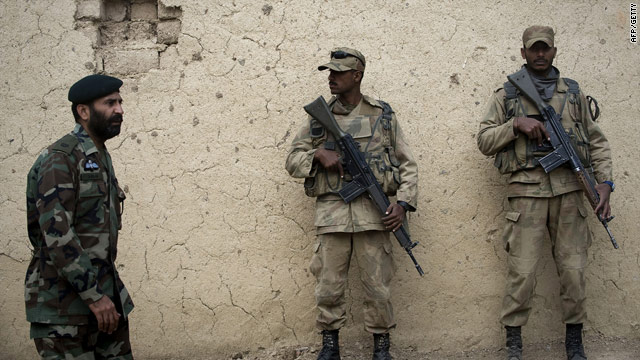 Islamabad, Pakistan (CNN) -- Violence raged in Pakistan's tribal region as seven soldiers died in an ambush and five people accused of spying for the U.S. and Pakistan were found beheaded, authorities said Friday.

The incidents occurred in North Waziristan, one of seven districts in the Pakistan tribal region along the Afghan border and a longtime militant stronghold.

The seven soldiers died when militants ambushed a military convoy Thursday night. Sixteen soldiers were injured in the attack, which took place in the Datta Khel area, a military official and a local government official told CNN.

Militants wielding small arms and rocket launchers surrounded the 20-vehicle convoy and opened fire. The Pakistanis called in helicopter gunships to chase the militants away, said the officials, who asked not to be named because they are not authorized to speak to the media.

Residents Friday found four beheaded and bullet-riddled bodies with a handwritten note nearby accusing them of spying for the U.S. and the Pakistani military, said Muthar Zeb, the top government official in North Waziristan.

He said residents found the bodies dumped along a road. Zeb said the body of another man accused of spying was found near the town of Mir Ali.

The Taliban have killed dozens of people in the tribal region for allegedly providing information to the U.S. about militant leaders' whereabouts.

North Waziristan is believed to be the operating base of pro-Taliban militant commander Jalaluddin Haqqani and Pakistani Taliban commander Hafiz Gul Bahadar, both of whom are suspected of fomenting the insurgency against U.S. troops across the border in Afghanistan.

The Pakistani military has yet to launch an offensive against militants in North Waziristan because it says its troops are spread too thin with at least ten other military offensives in the region.

Some analysts question whether the Pakistani military and its intelligence agencies have maintained links with militant groups in North Waziristan in hopes of maintaining influence in neighboring Afghanistan once U.S. and international forces leave.

North Waziristan continues to be the main target for U.S. drone strikes this year.

Based on a CNN count, all of the 27 drone strikes since January have targeted suspected militant locations in North Waziristan and its border with South Waziristan.

Journalists Nasir Habib and Nasir Dawar contributed to this report