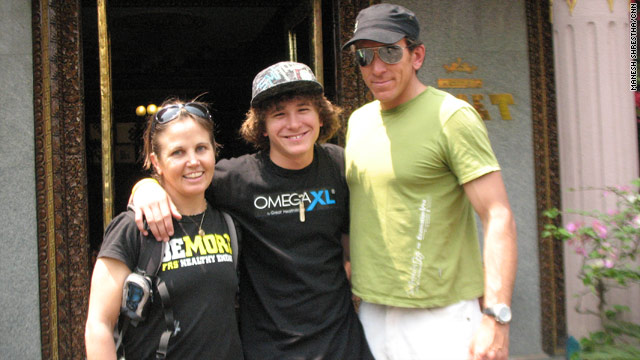 Jordan Romero poses with his father and stepmom in Nepal ahead of their Everest ascent on Sunday.
STORY HIGHLIGHTS

Kathmandu, Nepal (CNN) -- Thirteen-year-old Jordan Romero is climbing Mount Everest, the world's highest peak, not only for himself but to inspire more young people to get outdoors.

"Obese children are the future of America the way things are going," he tells CNN in Kathmandu Friday as he prepared to leave for the mountain on Sunday.

"I am hoping to change that by doing what I do -- climbing and motivational speaking. I want to motivate children and inspire them to get outdoors."

If he is successful, Jordan will be the youngest person to get to the top of Everest's summit, 29,028 feet above sea level.

With a smile he is quick to add, "I am doing this a little for myself too, to do something big."

Because he has already climbed five of the seven highest peaks on seven continents, known as the Seven Summits, there is good chance of success. But he is realistic. "This could be first of many attempts," he says. "But I am determined to do it if it takes two weeks or two years."

Having a very encouraging father and stepmom, who have gone around the world participating in climbing expeditions and competing in endurance racing competitions, certainly helps.

"This is not an isolated vacation," says Paul Romero. "This is a lifestyle. We travel everywhere and climb together."

The family started tackling the Seven Summits in the summer of 2005. Jordan was just nine when they climbed the 19,341 feet to the peak of Mount Kilimanjaro.

Since there is a debate about whether the tallest mountain in Oceania is Kosciuszko in mainland Australia or Carstensz Pyramid in Indonesia, Jordan and his family climbed both.

The only peak left for the adventurers to climb after Everest is the Vinson Massif in Antarctica -- a trip is planned for December.

The idea to climb the Seven Summits came to Jordan when he saw a mural of the mountains in the hallway of his school when he was nine. Before sharing his dream with his father, he did all the necessary research and only two weeks later told him of his ambition.

"I was very shocked he even knew what the Seven Summits were," says Paul Romero. "But then he is a complete nature fanatic."

The couple went to Kathmandu for the first time last year to see if Jordan could make the Everest summit from the south face in Nepal. But they decided to start their climb in the north, in China. "The south approach has different and less desirable risks than the north from what we hear," says Paul.

"The mountaineering world and Jordan may have their concerns about Jordan 's age but the boy is strong and skilled as a mountaineer as many of the people climbing," he adds. "There is proficient support and safety system about him."

He is naturally worried about the elements that are beyond their control but said that the team has a surgical approach to things that it can control. He being a paramedic with a specialty in high altitude physiology by training is an added advantage.

While the highest of the peaks that Jordan has climbed has been Aconcagua in Argentina which stands at 22,841 feet, Everest is different matter and for this he has been putting in more preparation.

"I have been exercising hard, concentrating on cardio training and endurance training," Jordan says. "I have been sleeping in an altitude simulator tent for the past month to get my lungs ready."

Jordan has been an outdoor person all his life and even takes kids to climb mountains in the Big Bear region of California where he lives.

Despite his achievements, Jordan wants to seen as a regular kid. "I try to seem like an average kid who happens to be climbing," he says, playing with his watch strap. "But I'm not really fitting in."

As part of his assignment from school where he reports once a week while at home, he has a journal to write in every day and algebra problems to solve.

Asked what his favourite subject is, he smiles, hesitates and says, "Physical education, I suppose."

Ten years down the line he sees himself participating in the extreme action sports event, the X games, and maybe even the Olympics.